Abuse of the Elderly in Nursing Homes Essay 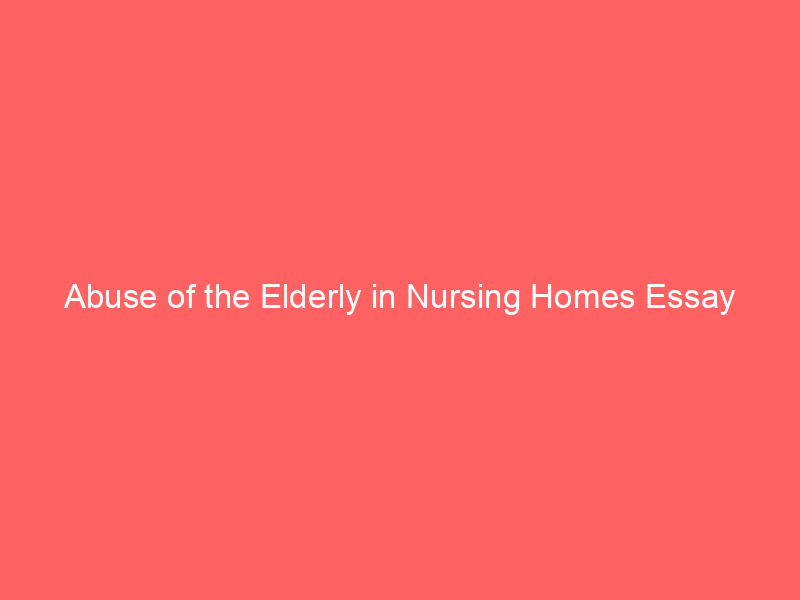 Essay on Abuse of the Elderly in Nursing Homes

The ineffectiveness of one to complete mundane activities characterizes old age. Conditions vary from one elder to another but, in most cases formal care is essential. At times family members fail to care for elders’ needs due to commitments, work, marriage and distance. Nursing homes function on the provision of care in this regard. Families entrust institutions hoping that they provide care for the elderly and commit them to programs suitable for their needs. Financial constraints create unsuitable working conditions and cause stress on staff members that end up retaliating on residents. Given the incapacity of elders, professionals face the challenge of tolerating residents’ circumstances. Some workers cannot endure the challenge of caring for elders. The lack of patience, resources and sufficient staffing in nursing homes contributes to elderly abuse.

Families of the aging identify the need for care and discover necessary means to address it. Akpeniba explained that the aging range from 65 and above characterized by the vulnerability to physical and health constraints (1). These challenges manifest in a form of failure to perform regular activities such as dressing, grooming, bathing and eating. Akpeniba stated that at times, modernity prevents family members from looking after the elderly and this results in the employment of either formal or informal care (1). A study conducted by NCEA concludes that nursing homes in the United State are 16,639 (1). Research statistics illustrate that a vast number of elders continuously need care. In 2008, 3.2 million Americans lived in nursing homes.

Failure to abide by the International Nursing Council’s responsibilities results in elderly abuse. Risk factors of resident abuse are necessary for one to comprehend the scope of the problem. Akpeniba explored that the inability to dress, feed oneself and bath increases contact between residents and caregivers which increases the possibility of abuse (38). High dependency rates create constant interaction resulting in caregivers’ failure to endure as such elders need attention and this causes stress to professionals. The care in this regard, requires patience and if one lacks such, she loses temper. Akpeniba outlined that residents’ behavioral problems contribute to abuse and cases vary from resident to resident (38). Aggressive, verbally abusive residents and a refusal to care increases abuse.

Due to residents’ distinct needs abuse manifests itself in various forms. Falk explored five types of abuse, “physical, psychological or emotional, financial or material, sexual and neglect” (1). Physical abuse causes bodily harm with residents having marks and bruises. Perpetrators kick residents, cut and punch them, and they have unaccountable bruises. NCEA’s gathered data revealed the rate of abuse occurring in nursing homes in the United States (2). In the research, Physical abuse amounts for the highest rate of 29%. Falk discussed restrictions of identifying psychological abuse due to the failure to produce visible bruises (1). It is hard because caregivers threaten and intimidate elders with harsh words. Akpeniba classified sexual abuse as a non-consensual sexual encounter involving a caregiver and an elder (7). The abuse involves coercion and in most cases perpetrators force victims to watch pornography and perform sexual acts.

Given that elders have retired, most of them have their own assets financing their care. Akpeniba stated that caregivers forge signatures in order to own elders’ properties (7). Falk explained that neglect is when a caregiver fails to cater for an elder’s needs (1). Bed ridden neglected parties are identifiable from bed sores which stem from caregivers forgetting or failing to turn them. Fall explored that facilities fail to provide sufficient meal to patients (20). The patients starve due to neglect with nursing homes failing to cater for a balanced diet.

The controversial nature of abuse produces boundaries that prevent necessary parties to intervene. Falk stated that not all abuses can be physically identified and this presents a challenge (4). Abuse’s extremity makes it an uneasy subject for victims to talk about. Fear overwhelms victims as they anticipate the perpetrator’s next move and this thus results in the failure to report incidents. The context of nursing homes limits elders to speak out about the abuse. Akpeniba explored that at times, health and level of dependency limit elders in reporting cases of abuse (8). Elders are always at the care of nurses in institutions and some have no other physical connection with the outside.

Social structures inherent in the healthcare sector hold the responsibility of ensuring that professionals adhere to rules and regulations of the profession. Falk stated that institutions such as the National Center on Elder Abuse exist to investigate and address cases of abuse (12). There are victims that utilize such opportunities at their outmost best and on no occasion, shy away from exposing the ills. The NCEA discovered that 44% of residents have reported abuse and 95% encompasses the number of both victims and witnesses of neglect (2). Testimonies from residents attest to violation of human right accompanying the previously mentioned ethical responsibilities. In order to avoid deeming testimonies by elders as allegations, research should include nursing homes staff to give their version of events. According to Akpeniba a research involving 49 studies shows that 16% of nursing home staff admitted to psychologically abusing residents (12). Such confessions allow concerned parties to intervene.

The existence of statistics outlines concerns and evidence calls for the classification of patterns that exist in identifying nursing homes that ill-treat elders. Falk noted that nursing homes suffering from financial challenges have a higher rate of reported abuses (12). These nursing homes are characterized by under-staffing, lack of training and inadequate staff screening. At times the staff receives minimum wages and their attitude towards the aging is affected. Akpeniba stated that under-staffing in nursing homes leads to stress and contributes to burnouts (40). The stress results in poor decision-making and negatively influences caregivers to disregard elders.

In cases where victims have reported abuse, concerned parties intervened. Akpeniba notes that intervention allows the implementation of strategies to help prevent future occurrences (40). The collection of data enables the process of prevention to occur. Akpeniba classifies three prevention strategies that include residents, staff and nursing homes (30). Resident strategies require full cooperation from elders, to avoid abuse. Advocates advice that elders attempt by all means to do most things for themselves. When residents do some of the difficult things, the staff achieves efficiency. Resident cooperation reduces pressure of under-staffed caregivers who will not retaliate. Akpeniba stated that lack of patience results in most abuses and to avoid that, the staff should create an environment that encourages residents to try (32). The staff should familiarize itself with ethical issues to avoid violating human rights. Akpeniba explored that Institutions should ensure that the available staff is capable of meeting resident’s needs (33). Under-staffed nursing homes should stray from taking numerous elders. Proper training allows staff members to endure through challenges of caring for residents.

Since families are mostly involved in committing elders into nursing homes, it is important to understand their roles and responsibilities in ensuring that such issues are addressed. Akpeniba outlined that when family members communicate with elders, it is easy for them to identify abuse (6). Visitations create trustful relationships between elders and loved ones. These relationships enable the sharing of such information and in cases of physical abuse, family members are able to identify violation through scars and bruises. Akpeniba also points out the situation of elders who have been abandoned by families in nursing homes as a limitation of family intervention (39). Lack of family ties at times exposes residents to abuse since the staff knows that no one can report it.

The government has a role to play in preventing elderly abuse in nursing homes. Falk explained that U.S government fines nursing homes depending on the brutality of circumstances (9). In cases where the level of abuse is severe, institutions are shut down. The subject of financial constraints leads to residents being charged for their stay. Falk describes that people are advised to save money for the future as 25% of the current population will end up in a nursing home by 65 (10). The U.S government additionally recommended that nursing homes screen their employees properly and not disregard allegations from residents. NCEA outlined that not much attention is paid to the abuse of elders in nursing homes and this makes data distorted due to the limitation of funds for research (2). It believes that sufficient financial means could actually unearth hidden encounters.

Nursing homes are essential facilities to have in modernity since they provide care to elders. The challenge is issues of abuse towards residents who at times fail to report due to fear or limited systems in places that enable intervention. Financial problems put a lot of strain on the staff. They are forced by all means to make ends meet with a little they have and end up stressful. Residents’ inability to perform daily activities also contributes to the workload and professionals of the under-staffed nursing homes release their frustrations on them. Parties involved in the whole system of elderly care bear the duty to ensure that cases of abuse do no arise.

Akpeniba, James. Abuse of the Elderly by Formal Caregivers in Nursing Homes: A Systematic Review of Underlying Factors. Arcada, 2016.

Sample Essay on Abuse of the Elderly in Nursing Homes