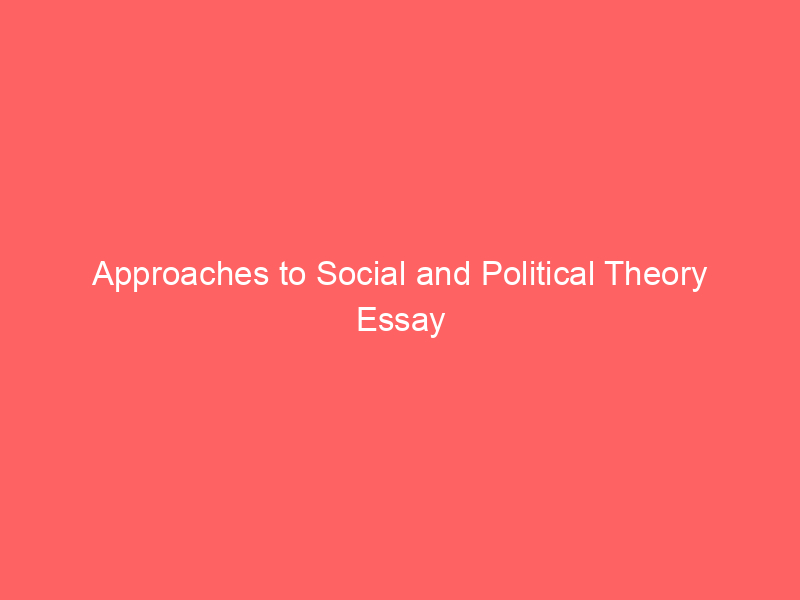 Essay on Approaches to Social and Political Theory

Plamenatz (1960) described political theory as a systematic thinking about government. However political theory is an eclectic discipline that draws upon the thoughts and concepts from numerous other disciplines such as social sciences, economics, philosophy, law and psychology making it difficult to establish clear distinctions between political theory and political philosophy. The main aims of political theory are shed more light on the values that are central to political actions and to explain the concepts that exist in the political arena such as legitimacy and authority of government (Beitz,1979).. It also aims at identifying the role of politics in social life. Political theory in the Western civilisation can be traced back as far as time of the great philosophers such as Plato and Aristotle.

Social theory is closely related as it seeks to elucidate on social contracts, demographic changes and legitimacy of laws. Political theory and social theory therefore share common ground and have considerable overlap in that the latter is concerned with how societies develop or are transformed, the nature of power and social structure and almost every problem arising in the social life of a society. This explains why the two subjects are usually studied and combined to form a comprehensive body of knowledge known as social and political theory.

This essay takes a critical look at the various approaches that are commonly adopted in the study of social and political theory and attempts to answer the question: What kind of approach should we adopt to the study of social and political theory: historical, contextual, conceptual, or ideological? To achieve this, it is necessary to have knowledge of not only the aims and objectives of the discipline but also of the historical background and the general developments that have taken within the construct. The recommendation in this paper is that the theory is made up of concepts and ideologies which can best be elucidated by using a combination of historical and conceptual approaches. An overview of the historical and conceptual approaches is therefore presented to support this stand.

According to Della-Porta and Keating (2008), ‘Approaches’ goes beyond theory and methodology to include other issues such as epistemology and the meta-theories within which the theory in question is located. In the case of social and political theory, it has to take into consideration the unit of analysis; whether individual or the social group and has to state the underlying assumptions of human behaviour within such a setting. Della-Porta and Keating’s perspective leads to some fundamental issues that are still contentious even after thousands of years of debates in philosophy.

The question of how knowledge is acquired is a foundational issue that has to be addressed in any approach adopted. It is important to agree and be clear on the epistemological assumptions that underlie the approach taken in any research endeavour in order to establish that some knowledge has been acquired and that the knowledge acquired is relevant and valid. In social and political theory, researchers often employ abstract concepts to represent the basic units of the social world under investigation. However there has to be a consensus of how common knowledge will be obtained from abstract concepts such as state, class or society.

However there are other approaches that use larger units such as classes and states in analyses (Claeys, 1986). Collectivism can be described as opposite to individualism in that it is a political or social philosophy that emphasizes on the collective nature of a group of people by elucidating on the interdependence that exists amongst the people in the group (Triandis, 2001). However Triandis and Triandis, and Gelfand (1998) mentioned that there were two distinct types of collectivism namely horizontal collectivism and vertical collectivism. In horizontal collectivism people are adjudged equal and sharing and cooperation are emphasised whereas in vertical collectivism people are expected to submit to authorities and observe strict hierarchical systems. Still on the question of units of analysis, the approach has to delve further on the level of analysis. There is need to understand the difference of a study at micro level with that on the macro level. In social and political theory, studies conducted at micro level look at individual households in a society while on the other hand the studies at a macro level concentrate on issues relating to the society as a whole (Della-Porta and Keating, 2008).

A third question to be addressed in any approach to social and political theory is the behavioural aspect of why people act. Some theorists accept the theory of rational choice which is based largely on the perception of individualism and which holds that people act according to self interest and in addition will seek to maximise benefits using the logic of consequentialism Critics of this notion support the idea that behaviour arises from socialisation and learned norms. There are also some others that explain behaviour from ethical and moral points of view. Therefore an optimal choice of approach should at the very least answer the three questions posed in the preceding paragraphs.

The empirical or contemporary approach takes a cue from scientific methodology. The purpose of this approach is to frame general laws similar to those obtainable in natural sciences. Proponents of this approach do not accept the philosophies and ideologies of the traditional school of thought and believe that there are facts about the foundation of social and political theory that are knowable and that these facts can be assembled to develop a general theory. They oppose the idea of emphasising abstract concepts such as state and sovereignty rather than dealing with facts.

Broadly speaking, empirical approach is descriptive as opposed to the prescriptive nature of the normative approach. The empirical approach concentrates on identifying laws such as the law of gravity that exist in nature and are unalterable by man hence they can only be described while the normative approach is concerned with laws that can be designed by man for the human society such as public order laws.

One of the traditional normative approaches is the historical approach. Researchers who use this approach seek to explain why scholars held the position they did. They study the great thinkers of the past to determine the foundations of the ideas and institutions present today. According to Kelly (2006) there are two forms of historical approach. These are the contextual and hermeneutic forms. The contextual form takes the view that the theory or idea is an historical artefact that needs to be examined carefully to explain the social and political circumstances why people at that time held such views. Kelly stated that this approach is similar to the approach developed in the Marxists’ theory of ideology.

The hermeneutic historical approach on the other hand seeks to explain or interpret the theory or ideology in the way people at that time understood it. The logic behind this approach is that in order to understand the intentions of the theorists one must first examine the questions they thought they were answering. The hermeneutic historical approach holds that the external circumstances prevailing at the time of the construction of the theory is not enough and an understanding of the intellectual state in which the writer wrote is also necessary for identifying the question that prompted the theory. This entails identifying the belief system prevailing not only during the time of the thinker but also those in the times of the predecessors. Kelly (2006) argued that history not only provides a method of study of political theory but also the object of study because politics is local and is moulded by the beliefs, characters, traditions and practices of the people involved.

The conceptual approach aims at studying and elucidating the meanings and the values that make up ideals such as equality and freedom (Bendix, 1963). It is also concerned with providing foundational knowledge on concepts such as power and authority. Mauro (2007) stated that a conceptual approach is mainly concerned with the ‘concrete and practiced political idea configurations, “thought-practices”, or ideologies that groups of political practitioners produce and consume’ (p.15).

According to Freeden (1998), the conceptual approach examines the internal morphology of concepts and ideologies through a process of de-contestation of the essentially contestable. Freeden (1998) described this process as the interpretation of ideologies by the synthesis of indeterminate meanings existing in the society. Freeden (1998) defined an ideology as a practiced political thinking which is used by practitioners in the political arena for the purpose of harnessing political support and implementing policies. Core ideological concepts are improved or expanded by combining other related and relevant ideas in a logical manner as it impacts on social and political practices over time. This accounts for the flexibility that conceptual approach exhibits in that there are countless possibilities of permutations. This approach is commonly combined with the historical approach to study topics in social and political theory such as liberalism, feminism and socialism (Mauro, 2007)

The conceptual analysis recognises and uses the flexibility of ideology to synthesis new knowledge from known ideas. It deals with active politics and tries to de-contest the contestable. Gunnell (1998) stated that “Politics is a conventional form of life that arguably had a beginning, evolution, and dispersion . . . and that has been characterized by an internal pre-constituted self-understanding of its qualitative features as well as its operative elements” (p.44). This suggests that the best approach to espousing the concepts and ideologies in the study of social and political theory would be both historical and conceptual in nature. The recommendation in this paper is therefore to start with a conceptual analysis and then apply the results to a historical analysis

Mauro, R. (2007). “Political science education and the conceptual analysis of ideology: A pedagogy and curriculum of understanding”. Prepared for delivery at the 2007 Annual Teaching and Learning Conference of the American Political Science Association, February 9-11, Charlotte, North Carolina

Plamenatz, J. (1960) “The Use of Political Theory” Political Studies Vol 8

Vertical Individualism and Collectivism”. Journal of Personality and Social Psychology 74 (1): 119.

Wood, E. M. (1972).  Mind and Politics: An Approach to the Meaning of Liberal and Socialist Individualism. University of California Press.