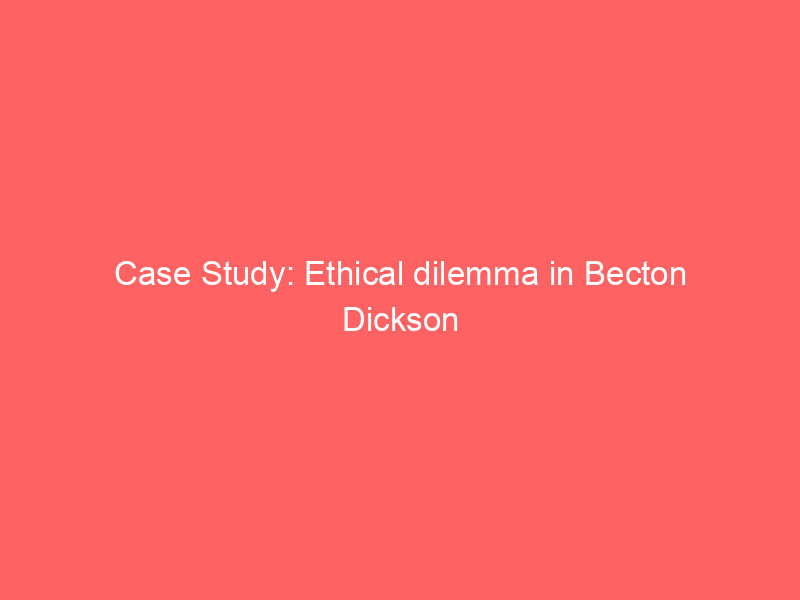 Physicians are giving care to HIV patients in a very high risk of HIV infection through different means while there are similar complex decisions to those who are already infected with the disease. The roles of physicians and health agencies are perhaps among the most contentious in the prevention of HIV among blood donation and injection users. Primarily, whether the government or healthcare providers should support or endorse efforts of providing sterile syringes used in the process of treatment and healthcare. Research shows that both the public and scholars have focused on the most appropriate use of syringes. It is an issue that has initiated debates on the efforts of deregulating syringes of the type of syringes that should be used in hospitals to reduce the risk of infections to patients dealing with HIV-infected patients (Seldman & Betof, 2014).

Facts underpinning the Ethical Dilemma in the case study

The case scenario illustrates some of the ethical issues faced by nurse practitioners in their everyday clinical practice. In their study, Boshoff, Kotze, and Nel, (2014) describe ethical dilemma as the situation characterized by two courses that are opposite but still requires a decision to be made between the two choices and each of the actions is equally urgent. However, each decision or choice normally carries a sense that seems to be the right one. In the ethical dilemma, it is common that the ethical conflicts make every decision look like the wrong move thus making it difficult and stressful to deal with ethical dilemmas facing nursing practitioners (Cho et al., 2016).

In the case, however, the ethical dilemmas presented are underpinned by various factors that affect the decision-making process in several ways. For instance, the working environment, the health condition of patients the patients have to attend, and the economic stability Becton Dickinson in acquiring the necessary health equipment for use among other factors. The health setting working environment is characterized by emergency cases where the nursing practitioners are required to attend urgently to the patients. In chronic levels, Seldman and Betof (2014), report that HIV patients pose a danger to the attending nurses and the family to various infections. The family members may be prevented from the predisposing factors, unlike the nurses who have to attend to them. It is for this reason that needle stick injuries account for 80% f the HIV infection cases in patients.

The condition of the patients also underpins the ethical facts as the nurses are at times expected to respond to stressful emergency situations (Gordon & Zimmerman, 2010). Such situations require quick actions that press them for a time both for the healthy variable demands and needs of the patient as well as a large number of patients that needs attention. Such working conditions in response to the condition of the patients as well as their health status make it difficult for nurses to adhere to ethical guidelines that are recommended for Becton Dickinson. In marketing needles with protective sleeves for use in Becton Dickinson, it is found that only the 3cc needles were available for use which is quite limited for all the duties of the clinical setting. The inefficiency of resources has thus contributed to the ethical situation presented in the case.

The decision-maker and the conflicting demands they have to accommodate

In the case study provided, the decision maker is the nurse who is in the predicament between continuing with her course or professional duty of attending to patients or suing the organization. Even though her HIV infection is accidental, the organization is still blamed for having insufficiency of safe resources that are vital for protecting the life of the health workers while attending to the HIV positive patients. Even though there are guidelines for health practices for nurses like Maryann Rockwood, devices in which safety is considered in their design could not effectively be afforded or provided by the organization. On the other hand, she has to respond to the conflicting demands of lack of safety devices and the risk it poses to her life, a situation that ends up getting her infected by the needle stick in the accident as a result of the use of an unsafe needle for drawing blood from an infected patient.

After a needle has been used, the technique of replacing the cap as you hold it in one hand and inserting the needle in the cap with the other hand is the riskiest and the major source of prick needle accidents. However, the danger of pressure during high emergency cases that needs quick responses from the nurses makes it even more difficult for the nurse to adhere to the safety procedures while using the needle according to Gordon and Zimmerman, 2010. Like Becton Dickinson, most clinics and hospitals have not their services with the safety syringes for drawing blood from patients with HIV and Hepatitis B. Maryann hence had all the right to sue Becton Dickinson for putting her life at a risk.

Initial ethical dilemma facing the decision-maker in this case

The epidemic of HIVAIDS has posed acute ethical dilemma for nurses and doctors among other health workers (Pill, 2009). For instance, doctors and nurses responsible for surgery of AIDS infected patients can easily get infected when they prick their fingers with a needle, sharp instrument, scalpel, and bone fragments. It can thus expose them not only to HIV but even other deadly blood-related infections like Hepatitis B (Cho et al., 2016). For instance, Maryann Rockwood is infected with HIV as a result of the accidental blood contamination through needle stick injuries.

Despite the risk of infected the nurses face, an ethical dilemma arises why she had to get exposed to such risky environments or use such dangerous equipment in the process of duty. On the other hand, Becton Dickinson had all the right of manufacturing safe devices not only for nurses in the organizations but even to other clinics and hospitals. At the same time, in attending to HIV and Hepatitis B patients, processes like drawing blood, intravenous system removal, and injection delivery among other risky processes is part of their duty as nurses. It is for this reason that needle stick injuries are on the rise amongst physicians in large healthcare centers accounting for over 80% or reported exposures while in the course of duty. Some of the ethical dilemmas presented here are;

The responsibility of the nurses to attend to patients in such environments is very vital as part of their professional responsibility. HIV patients are disenfranchised patients that expose the nurses to health risks as well and attending to them may be very difficult in the case of inadequate medical equipment. Nurses are forced to take care of advocacy role not only to counsel and educate the patients to live positively but also to take their medical duties like blood tests, drug distribution among other duties.

The treatment and control given to HIV patients are vital in lowering the death rate of the patients. However, even the nurses themselves are exposed to health risks of other viruses like HIV itself and Hepatitis among other life-threatening viruses.

Even though the nurse has been infected with HIV as a result of accidentally pricking herself with the needle, the whole blame is as a result of the scarcity of healthy needles that are recommended for use when dealing with patients who are HIV positive.

As much as the case was settled out of court, we are not assured of the legal justice procedures that were followed in the due process. For instance, as a big organization, Becton Dickinson as a renowned organization can follow illegal procedures that may end up not proving justice in the case. At the same time, Maryann is likely to lose her job with the organization for exposing the working condition of the organization despite its ability to provide the safety devices for the nurses dealing with such patients.

Analysis of the ethical dilemma

Different approaches to decision-making can be used in the presented case study while dealing with the ethical dilemmas presented (Boshoff, Kotze & Nel, 2014). For instance, in adopting the utilitarian approach method, it is recommended that the Maryann understand what will be the effect of her decision of suing the organization since a utilitarian argues that morality must depend on balancing the harmful and the beneficial consequences of our conduct. Therefore, she needs to understand the consequences if she loses or wins the case against Becton Dickinson.

Distributive justice an approach can be defined as the extent to which institutions in the society ensures that burdens and benefits are equally distributed amongst the members in a just and fair manner according to Cosali and Day (2015). For instance, the unjust and unfair working conditions in Becton Dickinson creates a strong presumption that it is not worth serving in the society as it poses unfair working conditions to the nurses as well as failing to serve other clinical and hospitals with the safety syringes for use. Distributive justice traces its foundation on the notion of interdependence, equal dignity, and social stability. For instance, the organization laid social unrest, strife, and disturbance as a result of unfair treatment of the ability to provide safe syringes and other medical devices to the nurses as well as other hospitals. It thus exposed many nursing practitioners to health risks and lose of life as supported by Kantian rights of ethical decision in a clinical setting.

Recommendation and justification presentation for the decision maker

The ability of articulating moral distress in an ethical dilemma confrontation can make confounding cases like presented in the case study very difficult to manage. Making decisions thus require a keen look at issues that can lead to finding solutions. Therefore, in this case, it is recommended that the nurse settles the whole case in court rather than carrying out the process outside the court. In this manner, it will be easy to follow the legal justice requirements with the constitutional guidelines at her back. Following this strategy can easily help her win the case and be compensated a sum worth the risks she faced and the consequence of her health while in the line of duty.

It is also advisable that she pays keen attention to the organizational and professional code of ethics in dealing with the patients with HIV as nurses are predisposed to very unhealthy risks in the process of duty. Understanding the ethical dilemmas in such environments as they use their skills bioethical skills can be vital to both the organization and the nursing practitioners as they engage in self-recriminations. Understanding the ethical liberation process between the nurse, the patients, and the organizations will help them to understand the steps they can take in addressing such ethical difficulties.

Pill, J. (2009). What’s So Great about Sograt?: An Analysis of the Ethical Issues Created by Tax Patents and a Patently Strict Dilemma. University Of Florida Journal Of Law & Public Policy, 20(1), 147-188