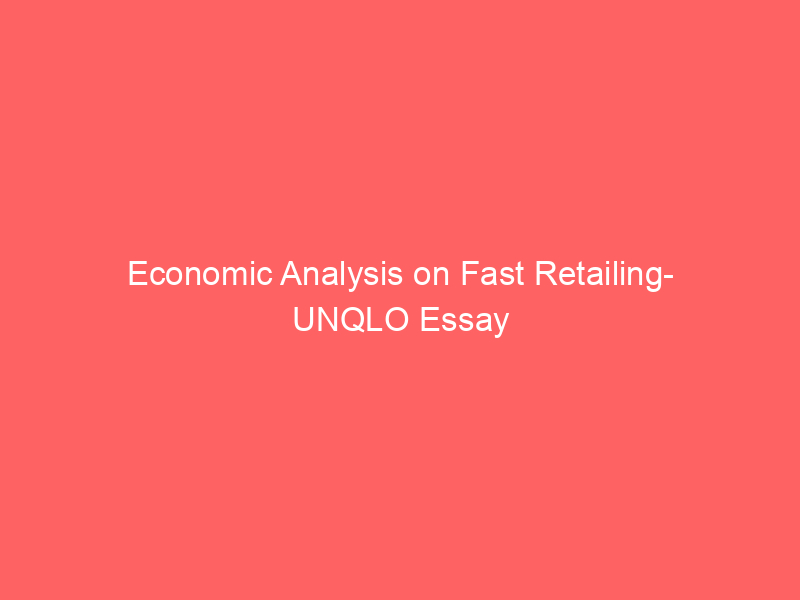 Just like any other viable business operation, UNQLO Company is not new to a range of market challenges posed mostly by competition from firms that are producing the same brand of products, for instance, Zara, Hennes & Mauritz and Gap (Teresa and Saima 114). Currently, the UNQLO firm functions under the trademark identity, ‘Fast Retailing Company’ and is even listed at the Japan Stock Exchange and among the top five cloths retailing outlets. The UNQLO Company remains the leading clothing retail company in Japan with most of its branches currently operational in a host of countries in Asia and some parts of Europe and to be precise, in about 15 countries globally as it stands (Teresa and Saima 116). Notably, most of the company’s stores are located in major cities and attract a range of customers from different socio-economic backgrounds.

The clothing retail firm, in the last financial report recorded approximately 700 million (yen) in gross profit and this was attributed to their increased expansion program and affiliation with the client base thereby accelerating sales (Teresa and Saima 117). Also, the company base their product development initiatives on feedback from their customer base and incorporate their views and concerns when designing new products. The company has a unique selling preposition that sets it apart from other companies dealing with the same products explaining its rapid expansion in the global market. For instance, the company markets itself as leader in the retail market and produces quality design cloths. Similarly, the unique management of the UNQLO Company and the quality of employee performances in the organization explains the global and domestic success of the establishment. Correspondingly, the relatively low production costs incurred by the UNQLO Company ensure that it remains viable in the largely volatile market. This is because the company uses readily and locally available resources such as labor that are cheap to engage and access primarily drawn from the local populace in the area of operation (Kim and Bowon 217).

Notably, the influence of the Fast Retailing (UNQLO) Establishment is mostly felt in Asian countries with approximately 633 stores around the world and about 852 in Japan. This is because the Fast Retailing firm sells itself as company where customers have relatively high bargaining powers. The primary objective of the UNQLO Company is the creation of clothing designs that are new and of unique value to satisfy the various demands of clients globally (Kim and Bowon 219). The company, as already noted banks on the customer feedbacks to produce high-quality design cloths explaining why the company is a favorite to most of the consumers. As a result, by 2013, the market share of UNQLO in Japan was at 6.2 % with women wear taking a larger percentage of this at 4.2 % (Kim and Bowon 223). The company is also listed among the top five clothing retail in the world with Zara, Hennes & Mauritz and Gap being the major competitors for the control of the cloth retail market.

Summary of performance of the business over the last five years

Arguably, the company has transformed from a suburban discount retailer to a firm specializing in the production of relatively high quality brands of cloths. The company, over the last five years has opened clothing stores in the prime and large shopping malls in most of the urban centers they operate in (West, Douglas, John, and Essam 412). The company has also taken over the most of the fashion buildings in Asia and some parts of Europe. Over the same duration, the company has also been expanding its outlets in major cities. For example in 2014, the company opened retailed stores in Ikebukuro and Okachimachi two urban centers that have been experiencing commercial widespread developments (West, Douglas, John, and Essam 418).

Performance of the UNQLO compared with its competitors

Despite the massive success of the UNQLO retailing company, the establishment is still susceptible to market competitions (Mauchauffée, Mika Tamura, Jean-Paul, and Rémy 85). For example, the development of online retailing at the establishment has for a long period lagged behind when compared to most of the competitors. In addition, given the free nature of cloth market, more firms are entering the international market further escalating the competition in the domestic and global market. Currently, the company operates in a number of nations around the world such as the United Kingdom and Singapore among other countries. For the past decades, the UNQLO Company has been a major player in the Japan clothing market and in some countries around the world (Mauchauffée, Mika Tamura, Jean-Paul, and Rémy 88). Their influence and power ranges from immense financial superiority, quality design cloths to the production units and net sales. However, companies such as Zara, Hennes & Mauritz and Gap possess serious competition in the international market. For instance, as at January 2015, the op three market rivals to UNQLO, Zara, Hennes & Mauritz and Gap had sales volume of 20.31, 18.04 and 16.43 billion dollars respectively with UNQLO coming fourth at 11.59 billion dollars.

With a target of an annual growth rate of 60 billion US dollars, the company still aims at becoming a global force in the SPA business by 2020 through increased expansion of retail stores. With an expansion rate of 21.0 % compared to Zara’s 8.3 %, Hennes & Mauritz’s 17.8 % and Gap’s 1.8 %, the company is on the right track of economic prosperity. The large-scale retail stores opened by the Fast Retailing Company over the past five years today account for roughly 25% of the UNQLO total outlets (Mauchauffée, Mika Tamura, Jean-Paul, and Rémy 95). The primary objective being an expansion of the total sales space and to be more competitive in the clothing market. The international sales of the UNQLO Company as o the year 2014 increased tremendously coupled with an increase in operating income. In addition, the sales from international stores accounts for close to 35% of the total sales at the UNQLO surpassing most of the rival companies that deals with the production of the same commodities such as Gap and Zara. Comparatively, UNQLO is a force to reckon in the fashion industry and has been registering positive performances in terms of profitability and customer satisfaction when equaled to its close rivals (Zara, Hennes & Mauritz and Gap) given its rapid expansion rate in the domestic market.

Possible future performance of the business, problems or issues

The unique design of cloths specifically engineered to enhance performance features coupled with the distinctive and sensible pricing policies depicts a brighter future for the company. The company is also currently building and relying on its international network with an aim of increasing sales and ultimately profitability (Basker, Emek, Shawn, and Pham 542). UNQLO is committed to the continued production of excellent commodities and will stand at nothing towards the satisfaction of the loyal customer base. The UNQLO firm also aims at increasing the collaboration with other firms such as Toray industries with an objective of improving the quality of the products.

The various stores to be opened across Japan and in the international market will display and promote UNQLO as a high quality-clothing network (Basker, Emek, Shawn, and Pham 546). The primary objective is to expand and increase the presence of UNQLO in the global markets especially in the United States where the company aims at opening over 100 stores by 2010. However, the increase in competition both in domestic and global market threatens the long run survival of the UNQLO retail company. Additionally, the various import taxes and conventions in the global markets may obstruct the belligerent growth and development of UNQLO. Moreover, a range of socio-political, legislations and socio-economic environments of countries of operation may also derail the production processes.