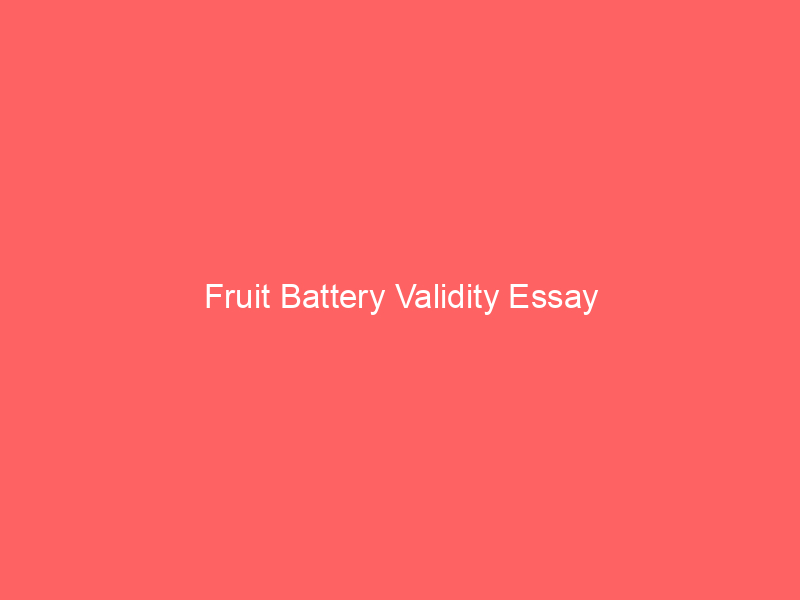 Plants play a significance role in human life from food provision to electricity. This research paper focuses on production of electricity using different fruits. Many devices such as phones use batteries as their source of electricity depending on the power requirement by a gadget. The study will show how different fruits can replace such batteries for the small devices using the charged ions technique mainly referred to as electrochemistry. Fruit batteries will use electrolytes or solutions such as lemon juice to generate voltage. However, the only challenge mainly to be experienced in this experiment is reading of voltages. Alessandro Volta used the same principle of lemon battery in 1800s in making a voltaic pile by applying copper and zinc disk. However, instead of fruit juice, he used saltwater, which gave a voltage output of about 5.5 volts. The voltaic piles became famous gaining use of experimenting on gases and identifying new elements. Today, wet batteries such as car batteries apply the technique of fruit batteries, which makes this experiment essential to learners.

The world today is grappling with global warming effects resulting from poor electricity production methods. For example, use coal pollutes the environment due to production of green house gases that may lead to acidic rain and even respiratory diseases. These methods are also expensive, but use of fruits as an alternative charger is not only cheap but it is also a clean form of energy production. It will save many household money-using fruits as an alternative for electric chargers. This experiment will help people reduce energy costs and learn new ways of producing clean energy as opposed to use fuel or coal to charge their phones or other small devices. Fruit battery experiment also prepares people for emergencies for it is essential to keep charged phones as a source of help.

In conducting this experiment, my hypothesis is that the larger the fruit the higher the voltage generated.

According to Walker (2012), batteries always contain two metal components inserted in an acidic solution (Walker, 2012). In fruit power battery, these two metals include zinc and copper. The acidic solution comes from the fruit’s juice. The metals act as the electrodes, which are the battery parts whereby the electrical current enters or leaves the battery. The charged ions flow from copper to the zinc through the acidic solution. Through the acidic bridge, the copper electrode accepts electrons from zinc to allow flow of a current. Failure to do so mean that there is no flow of current. The LED shows the presence of current through glowing or lighting whereby it glows only if there is a current flowing through it and in the correct direction.

The journal of chemical education explains that fruit battery is possible because fruits contain acid, mainly citric acid. The citrus acid in fruits makes them sour that may make one shiver after tasting like a jump-start (Smestad & Gratzel, 1998). This also applies that the bitterest fruits make the strongest batteries. Therefore, to light a bulb, citrus has to be present together with metals such as zinc and copper. Zinc, negative electrode and copper, the positive electrode, is applicable because they are conductors of electricity, thus will allow flow of current through them. The journal continues to explain that technological developments have seen companies produce electricity from living plants, which seem to an inspiration of fruit battery experiment. Plants have gained more use than before as they can produce food and electricity at the same time. Just like in citrus fruits, plant roots have electrons. They are produced during bacteria breakdown and harvesting them using electrodes can turn into electricity without affecting the plant’s growth. The most exciting thing with extraction of electricity from plants is that the energy is clean, which means it does not pollute the environment. Secondly, the system is cost effective. For example, according to scientific studies, one square meter can produce one watt of electricity, which means that families can generate their household energy from their farms. Similarly, the fruit battery uses materials that are readily available in the stores, which reduces the installation costs, which may arise from importation of materials (Smestad & Gratzel, 1998).

According to Ben Franklin, as image below illustrates, fruit battery is advantageous since one does not require any electrical system making them appropriate in areas without electricity. The absence of physical connection also makes the batteries portable. Additionally, the batteries are easily replaceable and are readily available in the markets (Schiffer, 2006). However, fruit batteries are only applicable for a limited time for they require constant replacements. Franklin concludes by stating that one can increase the amount of voltage by connecting many fruits in a series. Mostly applicable devices are fruit clocks, which are inexpensive and act as proof that fruit batteries can work. 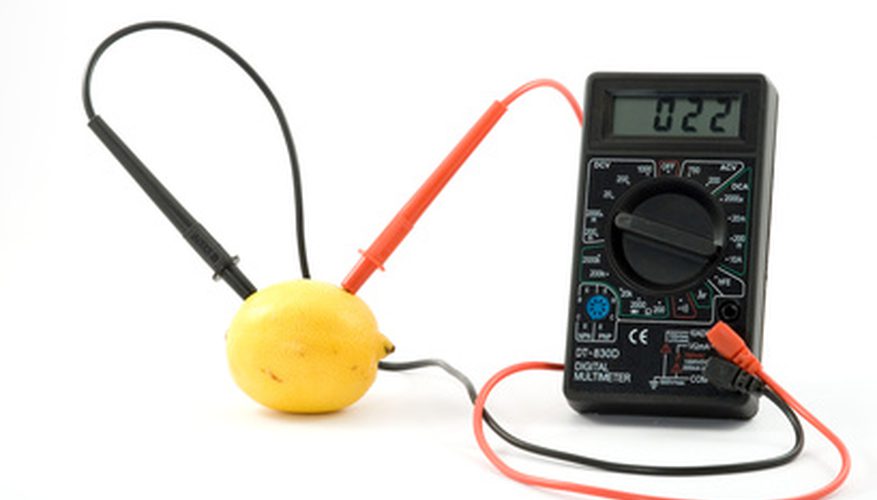 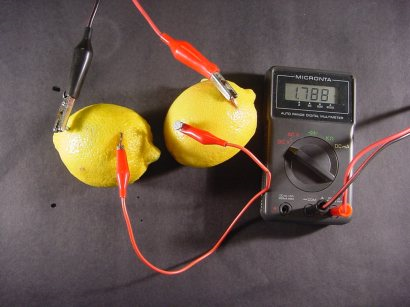 The experimental design steps are as follows

The above experiment investigates the amount of current produced by a given fruit. Therefore, each type of fruit will act as the independent variable and the voltage from lemon, orange or grapefruit will act as the dependent variable. Controlled variables in the fruit battery experiment are same sized copper and zinc nails, light bulb, a multi-meter.

It is essential to wash the zinc and copper nails with soapy water and then dry them to ensure that dirt sticking to them is completely removed. Additionally, using similar sized nails ensure that current from positive and negative electrodes reach the bulb at the same time, thus preventing bias in the experiment. The zinc and copper nails may not be pure which may lead to wrong results. It is essential that one substitute the copper penny with a common house copper wire.

The above results indicate that lemon produced the highest voltage of 0.95 while tomato produced the least voltage of 0.18. The chart below illustrates the graph of independent variables (X-axis) against the dependent variables (Y-axis) that represent the data of current produced by each fruit. Similar to the table above, the chart shows lemon has the highest bar compared to other fruits, an indication that it provided more current to the light bulb.

In the beginning, before conducting the experiment, my hypothesis was that the largest fruit, which is the grapefruit, would produce the highest voltage due to its large size. However, as the results indicate above, grapefruit voltage was 0.59 compared to the highest voltage of 0.95 by lemon. The results, therefore, proofs my hypothesis wrong as lemon had the highest voltage. Kiwi fruit was the second with a voltage of 0.78, grapefruit 0.59, orange 0.2, and tomato was the last with current of 0.18 voltages. The experiment proved that acidity is the biggest determiner of the amount of current a fruit will produce. Therefore, the more acidic a fruit is, the better it is in electricity conductivity. The size of a fruit was not a determinant of the current. This is reason that even without the nails touching each other, the fruit battery still allowed flow of the current. According to studies, every fruit contain positively charged ions. The moment I inserted the zinc nail into the fruit, the negatively charged ions moved from the fruit to the zinc nail, leaving the protons in the fruit. The electrons transfer led to the generation of electricity, thus lighting up the bulb. Lemon is an appropriate fruit in conduction of electricity due to its high natural PH of 2.0 and it is naturally acidic compared to other fruits such as the tomato and orange. The acidity in lemon creates both positive and negative ions present in the naturally occurring water in a lemon fruit. In the same experiment, multiple electrode pairs were put around a piece of fruit and connected them in series, zinc to copper to zinc to copper, and measured the voltage at the start and at the end electrodes. The different fruits indicated almost similar results to using a single fruit. The fruits with the highest acidic concentration, lemons, produced the highest voltage with tomato producing the least. However, the current ran out more quickly than using a single pair. The fruit battery act as a normal battery, which contains chemical energy that converts into electrical energy once, wired up. Unlike these batteries with reactive metals that give up electrons, the fruit battery uses the citrus acid in the fruits to produce electricity. In this wet battery, both oxidation and reduction take place where oxidation produces electrons while reduction involves use of the electrons.

The study has proven that acidity in the fruits determine the amount of current a fruit is capable of producing. Therefore, the experiment disapproves that size determines the amount of voltage generated. The scientific experiment has proven that plants can indeed produce electricity, and in fact clean energy. The universe is struggling with acidic rain resulting from global warming caused by fuel and other energy generating methods. This scientific study shows that the world can embrace clean energy by using plants, mainly the fruits in production of electricity. The important thing to remember is that the amount of acid in the solution determines the amount of voltage generated.

The experiment was successful due to many factors. One is because the experiment had only one independent variable, which is the fruit. The experiment made sure that nothing like distance of electrodes or length of wire was altered during the testing of each fruit. This made it easier for verification of every result. Finally, controlled variables were many from bulb, wires, size of nails, to multi-meter, which ensured that the experiment is well designed and reliable.

The experiment invites for its replication because it only focused on the acidity in fruits. It did not consider whether changing of electrodes from where they were in the first trial affected the current generated. It did not examine if putting them closer or far apart increased or decreased the current. The experiment also left room for determining the amount of time each fruit cell provided to the light bulb. Therefore, to improve on fruit battery experiment, I invite many studies to be carried out to considering all the factors and variables.

Some people fear asking for replication of their experiments, but they need to understand that replication help in confirming the validity of experimenter’s results. Those who will replicate the fruit battery experiment above, either to determine acidity or effect of different nail sizes, will be required to repeat the procedure applied in this study, thus validating the process. Additionally, repeating the same experiment of acidity and similar results are measured, the level of confidence that the experiment is valid will rise. The more the experimenters will replicate the fruit battery experiment, with similar results as obtained in this study, the more convinced they will be in its validity. However, lack of replication will leave scientists questioning the validity of the research.

Schiffer, M. B. (2006). Draw the lightning down: Benjamin Franklin and electrical technology in the age of enlightenment. Univ of California Press.