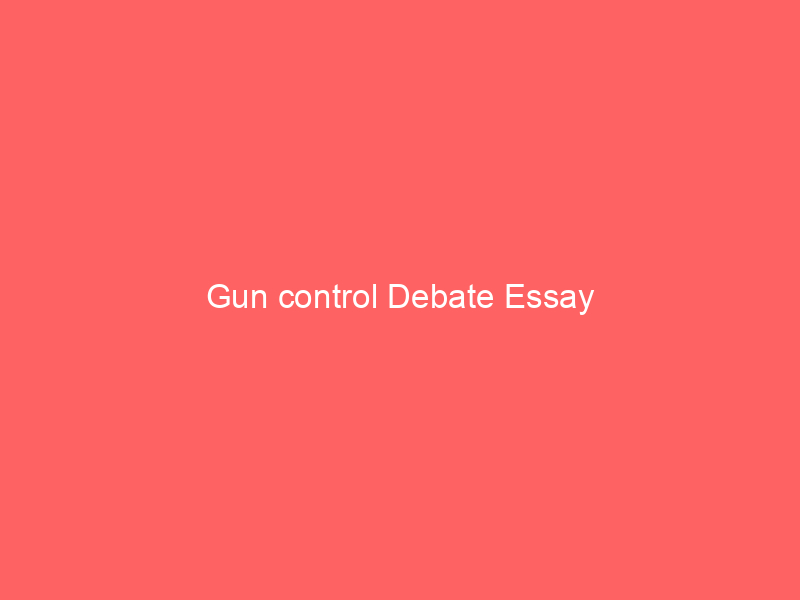 First, gun control efforts contradict the US constitution that recognizes the need for the American people to own a firearm provided it is not used for militia-related activities. Despite the clarity of the Second Amendment of the US Constitution, the pro-gun control groups keep suggesting and proposing laws that would violate this section. Surprisingly, the second amendment is not ambiguous; it clearly and sternly forbids against the infringement of the Americans’ right to bear firearms. In fact, Justice Antonin Scalia, in a 2008 District of Columbia et al. v. Heller ruling stated that Americans had the right for keeping firearms for lawful purposes including self-defense (Pollock 24). Therefore, the gun-related laws could be indicative of disrespect to the US constitution.

Therefore, any law interfering with the ownership and carrying of a firearm could weaken Americans’ self-defense abilities, thereby putting their lives in danger. The essence of the second amendment was to ensure that the American people could act in self-defense in the event of an attack, yet that provision could be threatened by any law that does not recognize this need. Worse still, those in support of the controlling laws hardly offer a remedy or a complement that would protect the Americans’ self-defense ability. Instead, the focus is always on the mass shooting incidents that occur around the country without considering the magnitude of the situation if all American households did not have guns.

Thirdly, gun-control laws may not adequately tackle the issue of the mass shooting as purported by the opposing groups. Often, the sections of people supporting gun-related laws argue that the US could significantly control the problem of the mass shooting. While mass shooting incidents have risen in the recent times, it is imperative to diagnose the problem as opposed to engaging in a knee-jerk reaction since such a move would not address the problem comprehensively. Lott claimed that mass shooting incidents present a new challenge that would require an approach that does not necessarily need to interfere with the current liberties (19). Therefore, the pro-gun controls ought to focus on measures that could be implemented to resolve the issue without infringement of the Second Amendment.

For instance, it is imperative to investigate and subsequently address the underlying problems that lead to the mass shooting. In most cases, the pro-gun crusaders rightfully argue that children and mentally-challenged individuals ought not to have easy access to guns. However, the group errs in suggesting that laws ought to be enacted to tackle that access. While the proposal to address the access of guns to the mentally ill individuals and children it commendable, the problem lies in the suggestion of drafting and passing laws that would affect even the law-binding American citizens. Surprisingly, most Americans use guns mainly for self-defense, target shooting, and hunting, yet these laws could have an impact on these activities (Doeden 7). Instead of creating punitive and oppressive laws, there should be a debate on the factors contributing to gun misuse including mental illness.

Furthermore, enacting gun-related laws without first addressing the illegal firearms in the hands of criminals could jeopardize the security of the Americans. Guns, unlike other weapons, increase the fatality rates and even intensify violence. In fact, Cook and Goss claimed that whenever guns are used in a violent case, the fatality rate increases up to 80% compared to other objects that may be used as weapons (2). The situation would be dire when law-abiding Americans face criminals with illegally-acquired guns as highlighted in the past. Apparently, more than 55% of all the murder cases reported in 1993 involved guns; 25% of rape criminals used guns to intimidate their victims the same year, while 24% of violent crimes committed in 1991 entailed the use of handguns (BJS 3). Incredibly, that is the grievous scenario that would befall the American people if gun laws are introduced before tackling illegal firearms.

In fact, such laws could strengthen the would-be criminals’ resolve since they know their motives cannot be hindered. As noted above, the gun-related crimes are significant and occurred at a time when there was no ban on gun ownership. The situation would worsen if stringent policies to curtail access or ownership of guns were introduced. While the highlighted cases above may be dismissed as having occurred in the 1990s, the situation had not changed much in the 2000s. For instance, 58.4% of the 16,503 murder cases reported in 2003 were attributed to firearms with 75% of the victims being under the age of 40 (Carter, 2006). Evidently, if such high cases of murder were reported when citizens exercised their rights to gun ownership, the numbers could increase significantly if that liberty is curtailed.

Surprisingly, the pro-gun Crusaders maintain that only laws can address the rising cases of shooting. Additionally, the proponents cite the case of Brazil where gun laws helped in the reduction of violent crimes arguing that the same could work for the US (Macincko, 2007). Sadly, such narratives have since been embraced by top politicians whose motive does not appear to address the exact problem but a mere reaction to the shooting incidents. For instance, the outgoing US president, Barack Obama, has been one of the most vocal political leaders to support gun laws without providing concrete proposals that would help in the satisfactory solutions.

Additionally, the pro-gun control side claims that introducing background checks could significantly reduce shooting incidents. The group argues that firearm sellers would be required to conduct a background check of every customer before selling any firearm. Apparently, the group claims that such actions would deter criminals from accessing guns easily. It is further argued that such initiatives would help the police to stop the would-be criminals before a crime is committed. Also, the group opines that the action would stop individuals from engaging in activities that are likely to result in blacklisting of their names. In other words, the proponents of gun control support the enactment of laws and background check policies to curb firearm-related vices.

However, both of these claims can be proved to be invalid since laws have been passed in the past yet their effectiveness was never witnessed. It is worth noting that the issue of gun control has been discussed for a long time without a reliable solution. In fact, the attempt to curb crime through gun control has only resulted in worse statistics. For instance, the Sullivan Law was enacted in 1912 meant to address gun cases in the New York City, yet the results did not improve. As a matter of fact, Wuest reported that “murder cases went up in 1912 by 10%” (39). In essence, gun laws do not adequately address gun-related crimes because criminals are not adherents of the law; only an open discussion would tackle this issue.

Similarly, the claim that background check-related laws could have a significant impact on reducing gun crimes is equally invalid. While background checks may identify a former criminal, it would not help in any way concerning the first-time offenders. In other words, the effectiveness of background checks is limited to the past offenders, yet gun crimes are committed even by teenagers who may not have criminal records. Besides, no one can accurately predict an individual who intends to commit a crime when purchasing a firearm, meaning that gun control is somewhat complicated. In short, neither background checks nor laws can completely stop gun violence since none of the two is adequate.

Instead, gun violence can only be tackled by identifying all the contributing factors and subsequently finding the relevant solutions. In the many instances where gun violence is involved, several factors act as catalysts including terrorism, crime, delinquency, and mental illness. In fact, Gold and Simon identified psychological conditions, weak ties, antisocial peers, and physical problems as the major factors that increase gun violence among the youths (n. p). Surprisingly, such factors are seen in shooting cases as evidenced by the Minnesota incident where a teenager, who claimed to be mentally ill, planned to kill fellow students and family members (Brumfield, 2014). However, such underlying issues are hardly mentioned or addressed by the gun-control enthusiasts, meaning that the proposed solutions may not be practical.

Moreover, the solution to gun violence lies more in balancing the merits and demerits of ownership than in blatant condemnation and violation of this right. Interestingly, there are other causes of death in the US whose number is as high as that of gun violence. For instance, overdose prescription is responsible for close to 15,000 American deaths; road accidents account for 30,000 fatalities while 100,000 are caused by medical procedures and infections (Cook & Goss, 2014). Surprisingly, no legislation or proposal of the same is ever mentioned to stop any of these activities since they are critical to the society. Instead, measures are implemented to address and reduce the problem; by the same token, gun control requires an objective approach.

In conclusion, there is no justification for gun control since such measures have proved to be futile in the past as evidenced by the Sullivan law whose implementation did not yield any meaningful results. Additionally, the background checks would only limit the past criminals without addressing the issue of new offenders. Also, the failure by the pro-gun control groups to address the underlying problems such as mental illness, antisocial behavior, and other social problems and their connection to gun violence is an indication that no law would adequately address this issue. Rather the remedy lies in discussing the matter with the same objectivity and fairness applied in medical-related constraints.