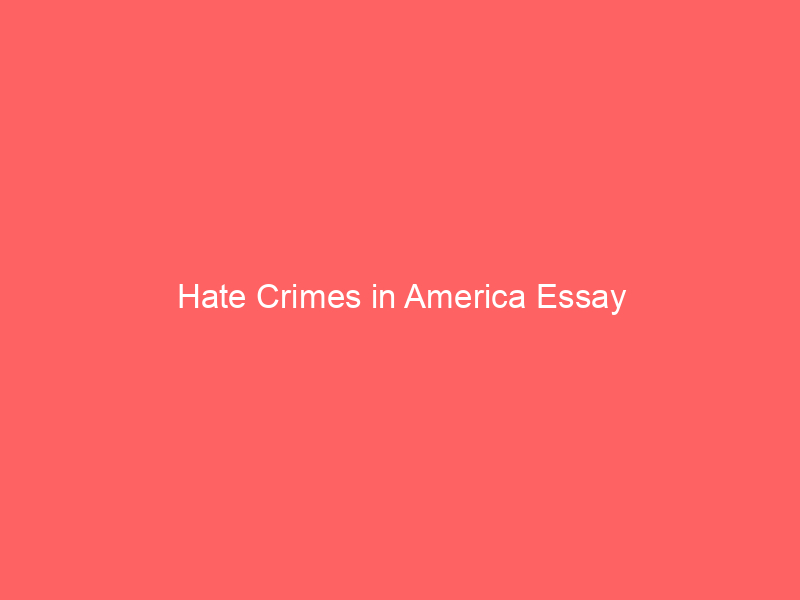 For a very long time in America, hate crimes have been a major problem for everyone. The most committed hate crime in the past was lynching followed by formation of groups like the Ku Klux Klan, founded in 1866. Many events have occurred in the past that sparked the problem of hate crimes back into the lives of individual, for example, the vicious arrest of Rodney King in 1991 which led to the Los Angeles riots in 1992 when the officers who were caught on tape beating King were found not guilty. Thus, in this paper, I am going to take a look as to why hate crimes have increased, and suggest ways to reduce the hate crimes.

Hate crime, according to the United States Department of justice, is an unlawful offense committed against a person, property, or society that is motivated by the offender’s bias against race, religion, disability, sexual orientation, or ethnicity, (Justice, 2004).

Cause and Effect of hate crimes

The most significant cause of hate crimes is prejudice against other people considered to be different. With bias among extremists, violence tend to occur resulting to damages to people and properties. Because people don’t understand things because of not being educated about them then fear sets in and thus prejudice. They then end up believing things that are not true of others, forming what is known as stereotypes. This affects perception of ‘outsiders’ as a whole leading to hate crimes against the ‘outsiders.’ A good example of stereotype is the perception of the African-American youths as being violent and that no one is to trust them. Another stereotype is that the Jewish have been perceived to be dishonest when they carry out their business deals. After the terrorist attack on Sep 11, 2001, all people from Middle East are considered dangerous to the Americans. For the Mexicans, they are lazy according to the stereotypes.

Another cause of prejudice is blaming others for the failure of other different people. People who suffer the most are the minority. They are often blamed for the cases in rise in unemployment, inflation, violence cases making the minority groups become the target of hate crimes. Another form of blame is the case of the September 11 attack, all Middle Easterners were blamed.

Hate speech among leaders, in the entertainment sector and any other significant figure in society may also form a foundation for hate crime. For example, when someone prominent talks ill of the Mexicans about their immigration and them bringing rise in unemployment cases promotes hatred amongst people and could be a cause of hate crimes in America.

When someone needs to be superior over others, then prejudice sets in. People in society often fight for power and status. This has the effect of oppression to a group of people. When the oppressed are seen rising to bigger positions, the egocentrics become agitated and start acting out against them, another form of hate crime.

Hate crimes have the effect of promoting cases of other crimes to retaliate, emotional harm of the affected individuals and unrest in the affected communities. Hate crimes also bring the problems of psychological trauma, anger and anxiety of another possible attack to the victims. Some retaliations are not violent though. People may fight for policy change to prevent any future crimes.

Hate also has the effect of negating social growth. Social changes are the norm of societies these days. With hatred and hate crimes however, people begin to disintegrate and thus minimizing the social growth in societies, or even in worst scenarios, stop completely social growth.

Another effect of hate crime is the fact that people start to live in fear when one of their own is assaulted out of hatred. The whole community lives anxiously with the possibility of another attack happening soon.

Defense purposes. When people feel that a particular group is invading them then they commit a defensive crime to make them think that they are protecting themselves. Offenders see other people a threat to their community and how they live. To them, these accounts of assaults are justified. Defensive hate crime example can be seen by Americans at large when they see that all Middle Easterners are a threat to them after the Sep 11 attack.

Bias against a race cause a larger percent of victims of hate crimes. The blacks form the largest part of victims of hate crime, followed by the whites who come second. The African Americans in particular was as a result of slavery in the days of colonization. The third group was that of a multiple race background. Next in this list are the Asians and lastly American Indian, (FBI, 2012).

The second largest is bias against religion, half of which were as a result of anti-Jewish prejudice. The Islamic religion falls second place, mostly because of terrorism acts portrayed in 2001. The types of crimes for this type of bias is damage to property, a good example being the Jews, (FBI, 2012).

Individuals of a different sexual orientation fall victims of hate crimes. Homosexual males form the majority group followed by the homosexual females. The most victimized in this group are the teenagers and young adults. The effects of crimes due to prejudice against sexual orientation suffer psychological trauma and studies show that they take long to recover.

Ethnical groups also form part of an affected group. This is much seen in Mexican immigrants. The Arab Americans also suffer ethnical bias ever since the 2001 terrorist attacks. Hostility against the Arab Americans still exist up to date, (FBI, 2012).

Social policies should be highly considered if hate crimes need to be stopped. The police agencies should realize the seriousness of these crimes. Thus, effective policies need to be created to help in the fight against hate crimes. If found guilty, an offender should be given very harsh punishment to act as an example to any possible hate crime offender. The government should also include education on hate crimes in the curricula to educate children and young adults on the bad effects of crime and promote peace, love and unity amongst individuals of different race, culture, ethnicity, sex etcetera.

To the victims of hate crimes, I feel that they should report the crimes committed against them. They need to know that they too are America and have a voice. This, however, will be easy if the law keepers are trained on how to interact with people of different cultures for better service.

Activities of organized hate groups should be brought to light so that thorough actions can be taken by those in charge to counter these activities. The more these activities are monitored, the less the cases of hate crimes are reported.

Public awareness of the hate crimes should be increased. This is very essential as informed citizens are the foundation of a democratic nation. Also, increasing public awareness is essential if the program to reduce or stop hate crimes is to be a success, (Hate Crime In America Summit Recommendations).

For a very long time now American society has suffered very ugly accounts of hate crimes. The reason for the crimes’ existence is that prejudice still exists in the American people. The effects of crime also is experienced in a large group in the society. It can also be seen that the motivators of hate crimes are bias towards some race, religion, sexual orientation and ethnical group. It’s so unfortunate that hate crimes will never cease because people always fear that which is different.

Despite the fact that much has been done to fight to prevent hate crimes, much more needs to be done. The public needs to be made aware of these crimes and education to both teenagers and young adults be included in teaching institutions. The police need more training and better policies. Victims need to be treated with respect as they get help. Laws need to be made in a clearer manner to be less controversial. Hate crimes will always exist in our society and battling them is just the beginning, and therefore, when we battle these crimes, we should do it with vigor and passion.