Impact of Movie in the Language Development Essay 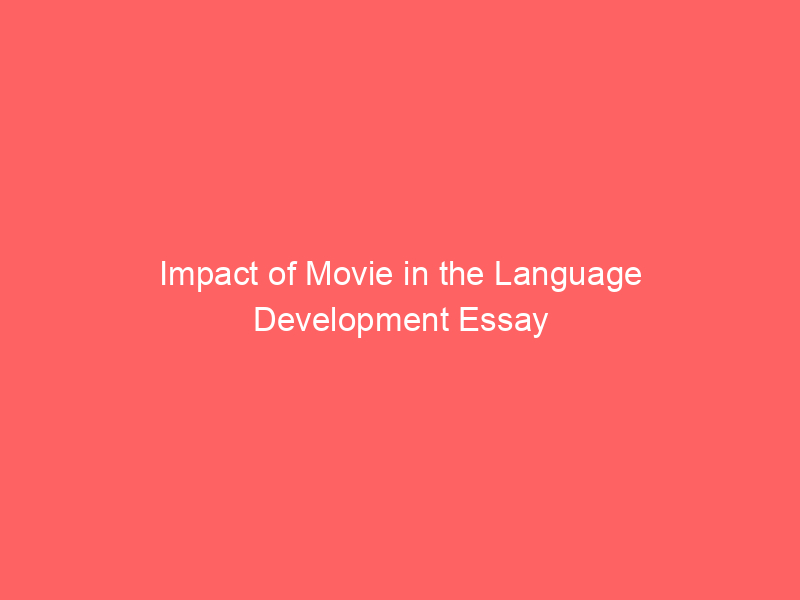 Research Paper on Impact of Movie in the Language Development

English is the second language for the most people globally; but in the process of training and development, people always make good use of mobilization of the positive factors, while decreases the impact of unpleasant internal and external factors (Ramasubramanian & Doshi, 2017). First, the development of human language is influenced by various internal and external factors surrounding human nature. Among the internal factors is the biological makeup of an individual which can be related to the lineage of their generation. The personality of the person is also imperative in the mutual development of the language, and this is contributed to the kind of food one consumes. The internal factors are therefore vital for the well-being of both written and the spoken world language of an individual, community and the entire nation in which accommodate various local and international personalities.

Films have been credited with a good number of scholars in their crucial contribution to the development of language. As a channel of communication, movies and television shows create a positive environment in the proper facilitation of language learning. It is as well likely to bring another assortment to the language erudition classroom by broadcasting singular forms of a film such as short sequences of films, feature-length films, adverts as well as short films.

However, movies are social platforms in which many individuals are prone to. Most of the film and television shows utilize a variety of entertainment tools and equipment which makes the entire show lively at the same time more appealing to audiences. Similarly, cinema is a place for relaxation, entertainment, enjoyable as well as fun for young people; movie forms a platform for leisure time since the current life is complicated, full of anxieties and full of worries. Movies, therefore, are items of human relieve from life situations as an ideal of social well-being.

Language development from films is motivating as well as enjoyable. Human beings are the most social animals who are taken care by social means in which give them hope and encouragement of economic, social and the political life in the past, current and the future life. However, motivation is among the most vital factors in the determining the success of second-language acquirement. Therefore, Films and the Television show forms an integral partner in peoples’ lives particularly for the case of students. The movie makes great sense to bring students into the classroom language, while the film, as a motivator, as well makes the world development of language process more enjoyable and entertaining.

Besides, the movie provides authentic as well as varied of language, it is a crucial benefit of film use that provides a foundation of authentic as well as different style. The film gives students with most of the useful examples of English employed in the ‘real’ situations outside the learning places such as classroom, mainly interactive verbal communication as the spoken language of real-life dialogue. The movie exposes learners to a natural terminology as well as a natural course of the speech. If individuals are no longer living in an environment of English-speaking, perhaps it is the only movie as well as television shall provide people with real language input in their lives.

Film as a language development approach, it provides an image context in which perception of the movie makes the film a less valuable tool for language teaching that enables learners in understanding more concept in the language by interpreting the development of language in a complete visual framework. Similarly, movie aids the students’ knowledge and understanding by facilitating them to keenly listen to idiom interactions and perceive such visual supports as facial terms as well as gestures at the same time. Such illustration clues support the verbal significance and give a focus of concentration.

In addition, the movie show contributes immensely to the flexibility and Variety of world language development. The film always brings variety as well as flexibility to language classroom by making a longer extend the range of techniques as well as resources of teaching. Also, offering students in the development of four skills of communication. For instance, an entire film and sequence might be used in the practicing, reading, listening and as a mock-up for speaking as well as writing. Most of the films might also be representing as a launch pad for follow-up errands for instance as debates on social matters, discussions, play roles, making a dialogue as well as summarizing (David, 2017). It is as well likely to bring an extra assortment to the language erudition classroom by broadcasting singular forms of the film: short sequences of films, feature-length films, adverts as well as short films. However, provided that, the primary benefits of utilizing film in the language development as well as classroom learning, it might not astonishing that many tutors are enthusiastic in the usage of the movie with the learners, and a living world language are successfully being integrated film into the syllabus language-learning.

In conclusion, the movie is an important weapon on the world development of language. The video contains an immense power to influence second users such as youths in their original thinking, behavior, attitude, habits, cultural, lifestyle, as well as a hobby (Goodwin, 2017). The language development as seen is the fundamentally dependable on the internal and external surrounding factors. The personality of the individual is also imperative in the mutual evolution of the language, and this is contributed to the kind of food one consumes. The world social media such as television seasons, various entertainment programs, movies and cinemas among others have an important impact on the language development of people, especially young generation. Although the film shows are of diverse forms in that, their influences are not similar in the language development.

Impact of Movie in the Language Development Essay