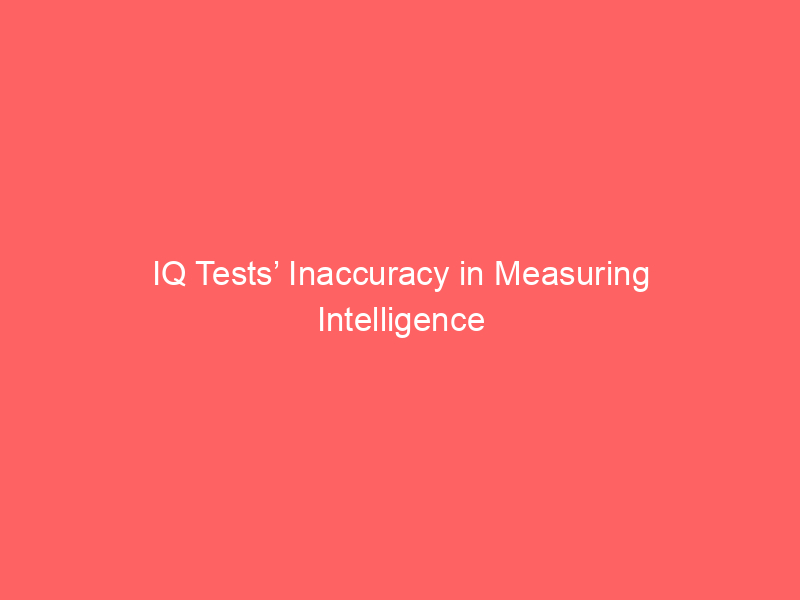 Humans consider themselves intelligent beings. Measuring intelligence level has however been an issue of concern for many years. To start with, intelligence is not clearly understood. Groups of people argue as to whether intelligence is just the ability to excel in class, read, and spell and write well, upon which the IQ test is based. The Intelligence Quotient (I.Q) has been used since the last century to determine, through IQ tests, a person’s intelligence by comparing their mental age and their chronological age. However, many psychologists argue that IQ tests do not actually determine a person’s intelligence, citing several reasons ranging from its lack of consideration for human being creativity and potential, to cultural and racial factors.

A person’s IQ is calculated as, IQ= (mental age/chronological age)* 100. An average person is expected to score 100 but scores below 85 are considered to be mentally retarded while people whose IQ score is above 130 are highly gifted. People with IQ scores of 150 and above are geniuses (Intelligence Tests, n. d). Assuming that intelligence refers to one’s ability to excel in studies and in respective areas of their professions, the Edublox website questions whether these groups of people can be termed as being intelligent: a successful physician who smokes at least three full packets of cigarette in a day or a Nobel Peace Prize winner whose marriage has failed?

Intelligence should be defined in terms of logical reasoning skills, critical thinking, adaptation and problem solving skills. IQ tests do not however contribute to testing of the mentioned skills-they only test what one has learned. The Wechsler Intelligence Scale for Children-Revised (WISC-R) test for example, is composed of two parts: the performance and verbal scales. The verbal scale consists of specific knowledge, vocabulary, memory skills as well as expressive language skills. Performance scale on the other hand measures perceptual skills, speed, motor coordination and visual-spatial skills. The components of the two scales both basically test what the individual has learned, not what he or she can do in terms of their potential, and is merely academic (Edublox, n. d).

IQ tests have major faults. For instance, the Wechsler Preschool and Primary Scale of Intelligence Revised (WPPSI-R) is used to test the intelligence of young children between the age of three and seven. Sacks (2001) notes that the test emphasizes on testing speed rather than testing the child’s ability to arrange objects accurately. If a child arranges objects in the shortest time (say less than 5 seconds), the child is deemed to be more intelligent yet another child who takes 9 second to arrange the objects in an equally accurate manner is deemed to be less intelligent. This implies that the WPPSI-R test does not test intelligence but speed, which renders it inaccurate (Sacks, 2001). In reality, the child who takes a slightly longer time to arrange the objects could be intelligent with slow and more reflective abilities, not less intelligent.

Another issue with IQ tests is reliability. Test scores usually vary a lot-by up to 15 points between tests. The test-taker’s emotional state, unfamiliarity with tests, anxiety and other factors that may eventually affect the outcome are often overlooked yet they may lead to a low IQ score. If one is anxious while taking the test for instance, it is likely that they will not perform well hence they will be rated to have a low intelligence level, which is not true (Edublox, n. d).

As Benson notes, IQ tests have for long been criticized of portraying lack of creativity in individuals because of its emphasis on what the test taker has learned rather than what they are actually capable of doing, their innovative and creative abilities (Benson, 2003, p. 1-2). IQ tests insinuate to test takers that some of them were born with a natural ability to excel intellectually (geniuses) while others were born without such an ability and are not likely to succeed in life, they are morons. This contradicts reality in life and does not portray one’s real intelligence. Taking the example of a student who scores 90 in an IQ test but who has a great potential to interact with people and is an excellent basketball player, such a score can hardly represent the student’s total abilities-it will be a mere representation of academic abilities but not their overall success rate in life. A top computer wizard who scores an IQ of 130 and who is ever in debt and is a terrible drunkard cannot be termed to be intelligent but a top football player such as many top players in the English Premier League are definitely success stories in life despite their not-so-high IQ scores. Creativity and potential hence form a fundamental part of one’s intelligence unlike the Stanford-Binet and Wechsler tests that may discourage an individual.

IQ tests are used in many situations. For army officers, IQ tests usually determine which specialized studies an officer will pursue depending on their score. In classes, IQ tests are used to determine which students should join which grade depending on their IQ score, and in some cases the test is used to distinguish mentally retarded children or children with learning disabilities from children with normal learning ability. Niolon (2005) agrees that minority children may often receive wrong IQ scores for various reasons. Such young children may fail to appreciate the demands, time pressure as well as achievement stimuli attached to such tests thus they may fail to score appropriately. Minors are generally considered to be culturally immature for the IQ test thus it is not a real representation of the child’s IQ. This often leads to some children being categorized as mentally retarded, against the reality (Niolon, 2005).

IQ tests have also been criticized for their racial biasness. Most tests rate Europeans , Caucasians and other groups of white people as scoring higher IQ scores than African Americans (and other colored groups of people), with the latter scoring at least 15 points less than Caucasians. Plotnik and Kouyoumdjian point out a case in San Francisco in the 1970s where Larry, an African American child, scored less than 85 in an IQ test. He was thus categorized as a mentally retarded child and was placed in special classes but several years later when he was retested by an African American psychologist, his IQ score was higher than 85, and was eventually placed in regular classes. This indicates that IQ tests are not accurate ways through which a person’s intelligence can be measured (Plotnik & Kouyoumdjian, 2010).

Clearly, intelligence is assumed to be the ability to excel in class and in careers but it fails to consider other areas of life such as social life and personality which to a great extent determine one’s overall success in life. In some cases, it even influences one’s career. IQ tests fail to consider human creativity, potential and other forms of success outside academic circles. Similarly, IQ tests fail to establish a universal intelligence test scale with its racial and cultural biasness, with some races generally expected to score less than others, and with emotional status, anxiety and other factors failing to be considered. In some children’s IQ tests such as WISC, speed rather than comprehension are emphasized. IQ tests cannot therefore be considered to accurately measure a person’s intelligence.

Intelligence Tests. Retrieved on June 23, 2011 from

Sacks, P. (2001). Standardized Minds: The High Price of America’s Testing Culture and What We Can Do To Change It. Cambridge, MA: Da Capo Press.