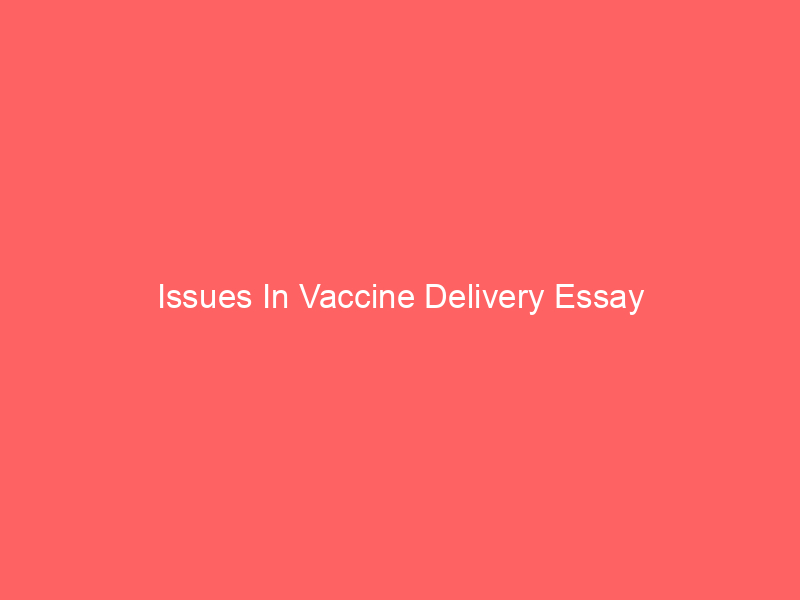 Millions of people die from infectious diseases annually including children under the age of five, particularly in developing countries. Significant progress has been made to facilitate immunization campaigns globally in order to protect people against many of the infectious diseases (WIPO, 2011). Nevertheless, various issues tend to affect the delivery of the vaccines to target populations such as logistical support, storage issues, lack of expertise among others. One outcome that comes with lack of efficacy in handling these factors is increased cost of the vaccines which continues to increase the difficulty of accessing conducive treatment. Thus there is a need to find a way of overcoming these issues in order to reduce the costs affiliated with the vaccines and make them more affordable to citizens.

Proper storage and handling of vaccine are critical right away from the point vaccines arrive into a facility. One important factor is a lack of ability to maintain cold storage temperatures due to failure to maintain the cold chain. Vaccines recommended to treat such diseases as Diphtheria, tetanus, yellow fever and the oral polio vaccine require cold storage temperatures of between 2 and 8o C to enhance their efficacy (Ren et al., 2009; WIPO, 2011). It is worth noting that where countries may be cold by nature like polar regions then achieving the required storage temperatures may not be a problem. However, the issue comes in the tropical regions and other hotter regions like the sub-Saharan Africa where it has been approximated that 40% of the vaccines in these regions end up being ineffective due to poor temperature storage (WIPO, 2011).

More and more medical practitioners have been administering vaccines to their patients. Nevertheless, there has been a lack of proper education and training regarding vaccine administration. Such a lack of knowledge has created a remarkable difference between adult medical providers and their pediatric counterparts who have been well trained for the administration process (Tanzi, 2014: 24). Lack of proper training accounts for the most medical errors experienced in the public health, for instance, improper dosing during vaccination. In fact, invalid dose administration accounts for about 10-35% of toddlers (Hibbs et al., 2015). Other issues that may arise with the lack of proper training on vaccination are excess immunization, the improper spacing of the doses, and even poor storage. The Vaccine Adverse Event Reporting system has identified various error reports as depicted in Table 1 regarding the errors of vaccine in the outcome section. From the table, among the topmost reported errors were those of wrong administration of vaccine which altogether resulted from inadequate training (Hibbs et al., 2015).

Outcome of the Issues

Development of vaccines to prevent infectious diseases has been the major capstone for the public health sectors in the last century. A vaccine’s efficacy largely relies on the quality of the immunizing agent. Therefore, appropriate handling and storage of vaccines are important to minimize treatment costs and improve the level of confidence in patients. Improper storage will only heighten the occurrences of vaccine-preventable diseases. With poor storage there is a likelihood that treatment costs will increase as thousands of dollars would be lost in wasted vaccines thereby leaving a few which would lead to increased demand, thus, increased cost. From another perspective, ineffective vaccines due to mishandling and storage would lead to repeated vaccination. In treatment, this is considered an error as it leads to repeating of dosage without proper change. The result is that the patient ends up losing confidence. Proper management of vaccines particularly storage and handling procedures form the basis of good immunization practices (Hamborsky, Kroger, & Wolfe, 2015: 63).

Proper handling of vaccines normally come as a result of training. Medical practitioners should receive adequate training that would enable them to handle and store vaccines as required. Most errors of vaccination are due to lack of appropriate training regarding vaccination administration and handling. Focusing on administration alone various issues may crop due to insufficient training. For instance, most of the commonly reported errors arising from the wrong administration of vaccines are using wrong vaccine on a patient, following improper dosage of the vaccination, and improper spacing of the vaccine doses. Most of these errors arise from packaging errors whereby names and abbreviations used sound alike, and even the packages look alike thereby creating some level of confusion on the novice (Hibbs et al., 2015: 3171).

In a research conducted by Hibbs et al., (2015: 3173) errors arising from vaccination were tabulated as shown.

Although there could be slot pertinent to administration errors alone, it is possible to infer that in one way or another most of the errors were from administration issues. The data obtained from this table supports the outcomes that can result due to lack of proper training. Improper scheduling was the topmost error noted in the vaccine delivery. From the research of Hibbs et al., (2015: 3173) it was observed that there was a lack of uniformity in the timely intervals that were required to administer vaccines storage and wrong vaccine followed in that order. In fact, almost all the reports that Hibbs and colleagues went through had instances of patients receiving vaccination using vaccines that had been stored at improper temperatures (Hibbs et al., 2015).

As it is said that ‘an ounce of prevention is worth a pound of cure,’ issues resulting from vaccination delivery are preventable. Errors in the delivery of vaccines can have miscellaneous impact of the general life of the patient in terms of protection, treatment costs, and most importantly reduce the level of confidence in a patient. A lot has to be done like training patients to improve their efficiency in the handling of vaccines and even administration so as to reach the health outcome level desired.

Adult providers providing vaccination alongside the pediatrics require some training. For instance, they could join a certification course that would equip them with the necessary skills required for proper administration of vaccines. Currently, there is a remarkable gap in the training programs employed to cater for the vaccination exercises. Providing more training programs should be the focus of every medical institution to enhance efficacy in the entire vaccination process.

Train on handling and storage

Handling and storage is a chronic problem for retailers. Thus, much training should focus on retailers and equip them with the skills on how they can achieve proper storage temperatures despite the environment and how to handle the vaccines. For instance, the British scientist in 2010 made a breakthrough that provided simple ways of increasing the stability of vaccines even at extreme temperature using technology that would revolutionize the vaccination efforts (WIPO, 2011). Also, temperature is not always stable and therefore reading and documenting temperature variations at time intervals could be another way of achieving vaccine stability and efficacy.