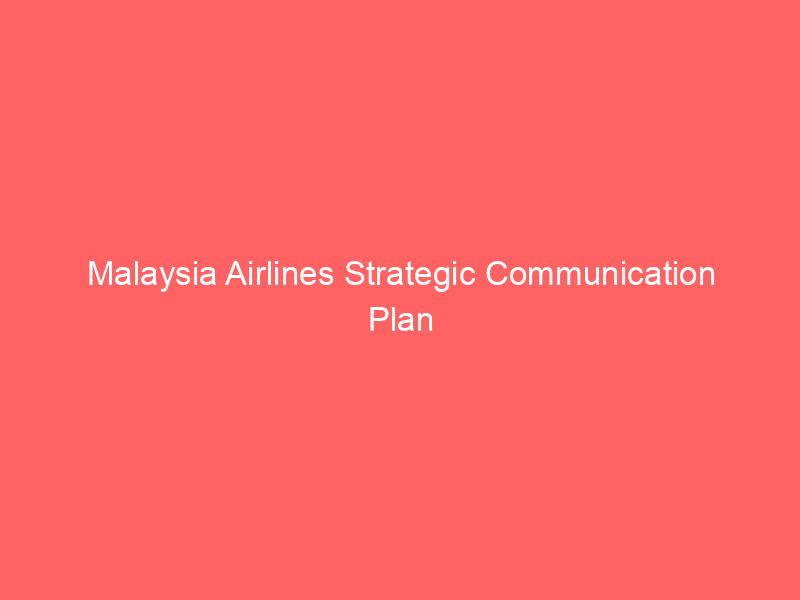 This is a strategic communication plan for the Malaysia Airlines (MAS) to help the company rebuild its financial, economical and social reputation in the sector of global online following the two airline crashes. This plan is developed and presented by the senior communication officer at the Malaysia airline. The two plane air crashes occurred in 2014 and involved the airlines flight 17 over Ukraine and the flight 370, which disappeared and has never been recovered. There was massive loss of human life and financial loss to the Malaysia airline. The company showed lack of a communication plan during the two events and thus there is need to have a strategic communication plan in place by the airline management to save their brand image and reputation.

Malaysia Airline system (MAS) is an airline that has operations in Kuala Lumpar and travels to major operations and destinations within the Asia continent and Europe. It begun its operation in 1947 and carries a Kite design logo (Malaysia Airlines, 2015). The airline has scheduled flights in port of Subang and Penang operated under Firefly subsidiary. Additionally, there is the MAS cargo-hold aircraft under the MASKargo and fleet freight.

According to Malaysia Airlines (2015), the overall performance of the airline company has been good with high positive performance aviation industry awards during the years 2005, 2007, 2009, 2012 and 2013. Additionally, the company has received leading airlines for World travel awards. However, the availability of carries that re loc-cost led the company to struggled in its operations to cut costs and has resulted to huge losses leading the airline avoidance of unprofitable routes I.e. America, South Africa. Then a big loss followed the trouble of the MAS Company.

In the year 2014 March, MAS experienced a massive loss of flight 370 – MH370, which traveling to China from Malaysia (Malaysia Airlines, 2015). The Boeing 777-200ER was lost over China south Sea after taking off from Kula Lumpar Airport (Patterson, 2014). The plane was carrying passengers’ total of 227 from various nations and had 12 crew members (Whitby, 2014).

Furthermore, five months later on July MAS was struck by another loss of the flight 17 –MH17 (Malaysia Airlines, 2015). The flight was scheduled to fly to Malaysia from Amsterdam. The flight crashed in Ukraine killing all in bound, a total number of 298 passengers died (Patterson, 2014). Due to poor communication and observation of travel routes the plane got hit by a missile in enemies’ territory.

The focus on communication failure is experienced in the situation where the airline MH17 was shot down by separatists of Russia and the wreckage and victims remain access by the media (BBC, 2014). The communication strategy on the side of Malaysia airlines is not sufficient to the family members and what they received is media controversies. The MH370 crisis was mishandled by the management of the airlines, where the information concerning the disappearance of the plane was never reveled or was partly revealed and most of the world and so to family members were left wondering about the plane disaster (Johnson, 2014).

How can the company maintain it’s reputable and award winning brand name? The next chapter the paper concentrates on the situational analysis of the MAS through SWOT analysis.

SWOT analysis presents the company internal and external environment an assessment criterion to assist in the identification of the suitable marketing strategies and communication plan (Harrison, 2015).

The paper provides the SWOT analysis from strengths to threats of the Malaysia airlines entailing the external and internal information data available concerning the communication and operational processes of the airlines.

Strengths of the Malaysia Airlines

Weakness of the Malaysia Airlines

Opportunities of the Malaysia Airlines

Threats of the Malaysia Airlines

A communication plan needs to offer audience-specific communication as the organization involved need to understand the message response mechanism from the customers (UnLtd, 2015). The message dispatched after the tragedy is received differently by different people in various countries thus segmentation of the audience or the market is important (Baines1a, Worcesterb, Jarrettc, & Mortimored, 2003). Below are the target audience.

The Asia audience uses the airline on daily bases as MAS as cemented its base operations within the region. These include the South, North and Middle East Asia; MAS offers around 60 destinations within these regions. The Southern Asia has major audience and the airline operated with its MASWings subsidiary in the provision of adequate travel services (Malaysia Airlines, 2015). However, after the MH370 disaster there has been hostility and anger from the Chinese communities has most of the passenger lost were from china, over 122 (Whitby, 2014).

Many European tourist tour the area for beauty and cultural satisfaction. According to Whitby (2014), the airline carries global customers and operates over 47,000 passengers most of who are tourists and business traders. The disappearing of flight MH370 was received in shock by the European nation and the preceding Travel Distribution summit in Europe, MAS marketing director Dean Dacko talked of the big scrutiny by the European market (Whitby, 2014). The Europe market is sensitive to communication strategy and requires a comprehensive report regarding the accident. The airline could get sanctions if it never provides a clear and defined report concerning the loss of the planes and the leading causes of the two disasters.

This is the major and most communication sensitive to MAS message and plan in dealing with the disasters. The Malaysian citizens fill non-presented through lack of basic information concerning the disasters of the country’s major airlines. The MAS relies much to its citizen to make major travel arrangement in regards to trade operations with other countries.

According to Zhang (2014) the government have a majority shareholding in the company as they provided multiple bailouts for the unprofitable airline and plan to nationalize MAS. The government are the internal stakeholder and information plus communication strategy needs to get comprehensive information form MAS executives. Najib Razak, the Malaysia prime minister is well concerned with the flight 17 loss and launches investigation to ensure that his people are well informed and served (Patterson, 2014).

Indeed, employee team members in charge of marketing of MAS strategies and travel services were assaulted by the affected members after the flights disaster took place. There is need to provide sufficient communication strategy to employees audience before communicating information to the public concerning the incidence. They are directly involved and have lost close friends.

The objective for the strategic communication plan needs to be specific, measurable, Oriented in action, be realistic and bounded by time (Melcrum, 2015). The MAS Company can determine and achieve SMART objectives through the following.

The message will be designed according to each target audience as message is perceived differently by different communities.

The best media platform varies with different target audience and the communication channels have been provided below in term of suitability.

A media schedule will help illustrate the Gantt chart that will help us implement phases of strategic communication plan. It includes the project schedule with dates for implementing the plan together with project summary and terminal elements for the project structure of work breakdown (Harrison, 2015).

In conclusion, MAS tragedy of flight MH17 and MH370 resulted into a big backlash from the international population due to the poor crisis management strategy for the airline disastrous occurrences. MAS Company has a major communication failure with its staff and its airline systems after disasters. The reputation of their brand lies on developing a strategic communication plan. The MAS company SWOT analysis reviews poor company structure weaknesses, dissatisfied employee workforce, increased government involvement opportunities, rationalisation threats, increased tourism growth opportunities, suffering financial crisis and raising security fear threats. The major MAS target audience for the communication strategic plan are the Asia community, the Europe traders and tourists and more to its Malaysian audience, the Government who are the majority shareholder and their Employees. SMART communication objectives include the hiring of communication agency, appointing director to attend summits, employing a spokesperson, having meeting with employees and communicating with the affected families. The message design for each target audience should be different and should be specific according to their contribution and their involvement with the airline. The choice of media include the national newspaper, radio and television for the Asia and Malaysian general public, the press release and publications for the government stakeholders, website to reach audience through social media and the direct mail to reach the employees audience. Indeed, for the company to maintain it’s reputable and award winning brand name and image they should implement the provided strategic communication plan.

UnLtd. (2015). Understanding your target audience and defining your value proposition.

Zhang, B. (2014). Three ways Malaysia airlines can deal with its uncertain future. Web. 22