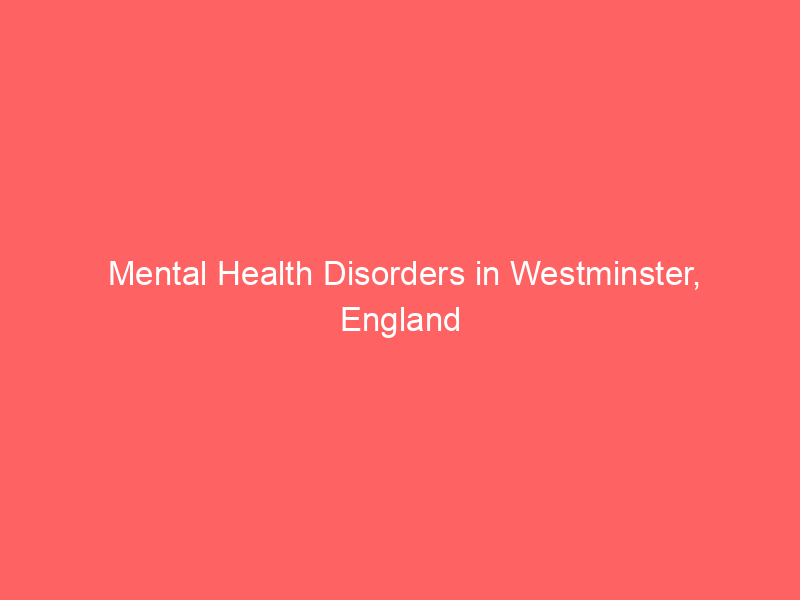 This study discusses mental health disorders as an urban health issue in Central London (Westminster), England. The increased urbanization witnessed across the globe involves not only the movement of people from rural to urban areas but also the economic, social and psychological aspects of the demographic transition. Although urbanization facilitates the economic growth and industrialization of the cities, it also presents a fair share of challenges. For instance, urbanization expedites an increase in stressors and other factors like polluted environment and overcrowding, limited social support, and increased violence, which impact on the mental health of the urban population. In a nutshell, urbanization increases the number of people in the urban areas beyond the capability of available resources and infrastructure. As a result, the families are exposed to various environmental adversities and heightened the risk of poverty, which in turn limits the social support. Such exposure to poverty and psychological difficulties subjects the urban population to risks of mental illnesses.

Mental disorders exhibit considerable experiences and symptoms, which can cause distress and compromise an individual’s ability to lead a normal daily life (Goldberg & Graham, 2013). Despite the existence of therapy and recovery from mental illness, the mortality rates attributable to severe mental disorders in Westminster are approximated to be between two and three times higher than the total population. According to the Department of Public Health (2007), the above statistics is attributed to untreated or undiagnosed physical disorders.

According to the Adult Psychiatric Morbidity Survey in England, the number of individuals reported to have mental health problems in Westminster between 2012 and 2013 was estimated to be 2554 (Department of Public Health, 2007). This value is 0.5% above the national maximum value of 0.84%. The department further shows that 145 individuals in Westminster translating to about 5.0% reported long-term health problems during the same period. The indicator examined people who responded to a national general practice survey. According to the Department of Public Health (2007), the prevalence (number of cases within the population) of depression among adults in Westminster was 6,289 between 2012 and 2013, translating to 4.0%. This local rate is lower than the national maximum value of 5.8% during the same period. The number of incidences (new cases per head of population) of depression among adults was estimated to be 1,315 during the same period. Similarly, the incidence rate is slightly lower than the national statistics by 0.2%. While previous epidemiological studies have presented incidence rates of 8.8% in the UK, a UK study conducted by Rait et al. (2009), estimated the incidence rate to be 2.5%.

According to the Department of Public Health (2007), major depressive illnesses are perceived to be chronic and degenerating, thereby leading to heightened levels of morbidity and personal disability. However, the statistics from Public Health Department (2007) show that the rate of prevalence of depression and anxiety together among adults was 13.2% which is 1.2% than the national maximum value.

Westminster recorded a significantly higher value of individuals who have sought accurate mental illness diagnosis. According to the Adult Psychiatric Morbidity Survey, the proportion of individuals with accurate mental health diagnosis was reported at 42.4 compare to the local value of 17.8. It is often time-consuming and challenging to access accurate diagnosis for a mental disorder. Through correct diagnosis, an individual can be able to articulate his/her health condition and seek a suitable therapy, including social support (Goldberg & Graham, 2013). Walsh et al. (2010), asserts that such diagnosis can also help health professionals in accessing appropriate procedures for a particular health condition.

The day-to-day life of an individual depends wholly on his/her medical condition (Jenkins, et al., 2010; Heinz, 2013). Mental fitness of a person dictates a lot concerning how that person carries out various social activities. CDC (2009), defines mental health disorders as ‘medical conditions that disrupt a person’s thinking, feeling, mood, ability to relate to others and daily functioning”. According to Heinz (2013), mental illnesses present several symptoms and experiences that can elicit distress, thereby compromising an individual’s wellbeing. Statistics from the Department of Public Health (2007), show that there are 2-3 times higher mortality rates in Westminster than in England in general due to undiagnosed or untreated physical illnesses. According to Hert et al. (2011), physical illnesses have a significant impact on the mortality rate among individuals with mental disorders. The study unraveled myriad factors behind heightened illnesses among individuals, including lifestyle, healthcare inequalities, and side effects of psychotropic therapies. Unfortunately enough, persons with SMI are yet to access quality health care (Hert et al., 2011).

The percentage of individuals with mental disorders in Westminster between 2012 and 2013 was estimated to be is 0.5% above the national maximum value of 0.84%. The variance in the prevalence rate of depression between Westminster and the general population is attributable to many factors. The higher rate of prevalence of depression in Westminster may be attributed to lack of diagnosing or treating physical and chronic disorders among patients, and instead concentrating on the mental illnesses (Srivastava, 2009). These physical disorders may include, bipolar affective disorder, schizophrenia among other psychoses. Wan et al. (2006) and Peer et al. (2004), further affirm that individuals with chronic illnesses or risk factors are at higher danger of developing mental illnesses than those without. For instance, persons with mental illnesses are twice more likely to engage in tobacco use than the general population (Goldberg & Graham, 2013).

The number of incidences (new cases per capita) of depression among adults was estimated to be 1,315 during the same period. Similarly, the incidence rate is slightly lower than the national statistics by 0.2%. While previous epidemiological studies have presented incidence rates of 8.8% in the UK, a UK study conducted by Rait et al. (2009), estimated the incidence rate to be 2.5%. However, this indicator established the impact of depression on practice systems during the year 2012/2013. Previous studies have explained why different environmental and social settings present mixed findings on the incidence of mental illnesses (Chapman, Perry & Strine, 2005). Social influences, including traumatic and social stress, abuse, neglect, and other negative experiences in life play a central role in precipitating the occurrence of mental illness among individuals in the society.

Besides, such community aspects like socioeconomic disparities, unemployment, and lack of social cohesion contribute significantly to the increased incidences of mental illnesses. Increased rates and prevalence of mental diseases such as schizophrenia is as a result of life in the urban environments (Chapman, Perry & Strine, 2005). Many researchers argue that urban environment provides haven for social stress, which in turn precipitate the occurrence of mental health incidences. Srivastava (2009), attributes life in the cities to increased prevalence of mood disorders, psychiatric disorders, and anxiety disorders. Therefore, it would be safe to argue that the environmental and social setting in Westminster present limited social influences and community aspects that facilitate increased incidences and prevalence of mental illnesses. For instance, there is reduced socioeconomic disparity among the populace, enhanced social cohesion, and limited social stressors. However, Peer et al. (2004), note that linking high social stress to the general urban population requires validation. This notion is equally shared by Mathews and MacLeod (2004), in their endeavor to unravel the urban factors behind increased prevalence and incidences of mental illnesses. According to Mathews and MacLeod (2004), studies should be carried out to proper ascertain whether increased social stress is as a result of rural or urban life.

The statistics from Public Health Department (2007) show that the rate of prevalence of depression and anxiety together among adults was 13.2% which is 1.2% higher than the national maximum value. It is noteworthy that contrary to this indicator which examines the prevalence of depression among individuals responding to national GP survey, previous studies utilized GP systems to ascertain the incidence and prevalence of depression and anxiety among persons in the UK (Department of Public Health, 2007). On one hand, the 13.2% prevalence rates recorded in the city may be attributed to the high response rate of patients with physical and other chronic conditions. On the other hand, the variation mentioned above in prevalence rates may be associated with variation in the speed of diagnosis of depression. According to Peer et al. (2004), the symptoms of half of attending patients with depressive illnesses in the UK were not recognized.

The heightened urbanization currently witnessed in the global arena has presented advantages and challenges alike. Urbanization increases the number of people in the urban areas beyond the capability of available resources and infrastructure. As a result, the families are exposed to various social and environmental adversities and heightened the risk of poverty, which limits the social support. For instance, Overcrowding has been touted to increase social stress in the urban setting. Exposure to poverty and psychological adversities subjects the urban population to risks of mental illnesses. However, the findings in Westminster paints a different picture. The rates of prevalence and incidence of depression in the city are considerably lower than the general population. There is a need to pursue research on the impact of social stress on mental illnesses among the urban population in a more appropriate way. Evaluation of such factors like environmental adversities, economic factors, effects of infrastructure, as well as social conditions is required so as to ascertain their contribution to social stress. Effective policy interventions are necessary to ensure higher employment, enhanced education and better access to health care among the urban populace to minimize social stressors and improve health.

Centers for Disease Control and Prevention (2009). Chronic diseases: the power to prevent, the

bias and neurocognitive deficit in paranoid symptoms: evidence for an interaction effect and changes during treatment. Schizophrenia Research. 71 (2–3): 463–71.