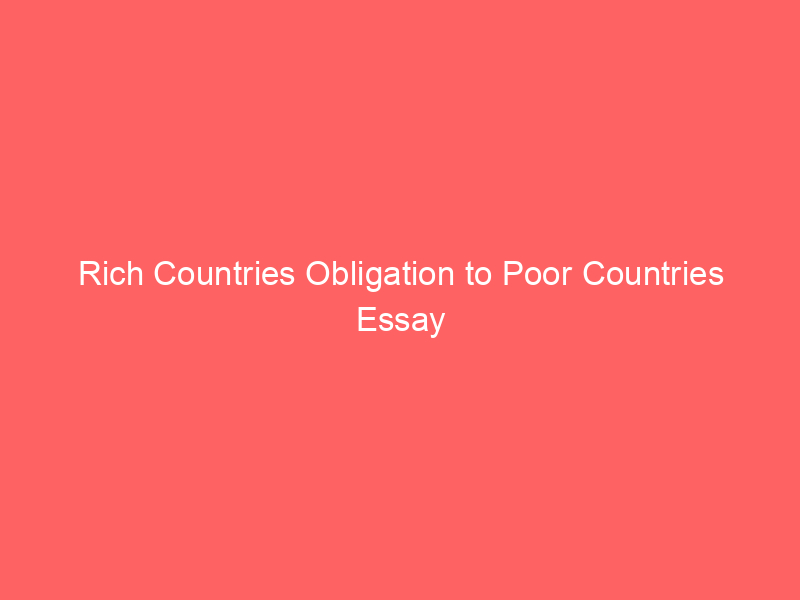 Relations between the poor and rich countries in the world have sparked an avalanche of questions today. Tension exists between our obligation towards poor countries on one hand, and the concept of laissez faire. This is primarily because there are innumerable benefits and freedoms associated with this kind of market system. Genuine recognition of the need to assist poor countries as well as social pressure to assist them as a matter of humanitarian obligation has been the fundamental premise in advocacy for this concept. However, the responsibility of rich countries towards poor ones has been antithetical towards the market. A tradeoff between economic benefits and confidence level in terms of how the resources are used in these poor countries exist. The plight of poor countries is of pressing nature and cannot just be dismissed without consideration. There is immense inequalities exists between the globe’s affluent compared to billions of poor people in the world. Urgent attention is thus important (Easterly, 2007).

This paper will delve into the obligation of developed countries towards poor countries by as envisaged by Thomas Pogge and Peter Singer. This essay will provide a brief synopsis of the views expressed by both Thomas and Peter. The precise dissimilarities between their ideas regarding our obligation towards poor countries will be examined, and any similarities in their views will explored in depth. It will further seek to provide a statement as to whether their views are contradictory or mutually complementary. This essay will seek to provide a sound argument for the responsibility of rich countries towards poor countries. This will be founded on the fact that about three billion people in the world subsist below $2.50 in a day. Premature deaths of about 18 million people per annum are because of poverty.

Peter Singer argues that people in poor countries continue to die due to lack of medical care, shelter, and food. The deaths and suffering by people in poor countries, in a fatalistic sense, are neither inevitable nor unavoidable. Cyclones, civil wars, and constant poverty continue to make people destitute refugees. Richer nations have the capacity to provide assistance to them in order to reduce these deaths and suffering albeit in small proportions. Actions and decisions by human beings have the capacity to prevent this suffering. Regrettably, necessary decisions have not been made to help them. Thomas Pogge disputes universally and minimally that we have some negative responsibility not to cause harm if and only if, this harm is avoidable and foreseeable, rather than positive responsibility to act well. Thomas recognizes that many children in the world die of curable causes like diarrhea and malnutrition. There are many premature deaths every year due to poverty-related causes. Peter argues that when people die from lack of medical care, shelter, and food, it becomes unacceptable, the demerits of the assistance notwithstanding.

Global poverty is viewed in terms of either the responsibility of rich countries in giving poor countries development assistance or their own responsibility. Thomas postulates that those wealthy people in liberal democracies in Western countries harm poor countries. However, he does not dispute the fact that domestic kleptocrats are to blame. Thomas posits that international institutions exacerbate and facilitate corruption that is perpetuated through national institutions. ‘Borrowing’ and ‘resource’ privileges enjoyed by illegitimate politicians in selling natural resources as well as borrowing money using the country’s and the people’s name are catastrophic. Peter supports Thomas criticism on how affluent countries react towards emergencies in poor countries. The egalitarian principle would dictate that the affluent help the poor to avert death and suffering.

Affluent citizens continue to violate the negative responsibility not to cause harm according to Thomas (2002). Upholding and imposing the established global institutional order foreseeably, avoidably, and needlessly causes poverty. His global justice theory encompasses scores of dissimilar aspects like policy change, moral theory, rights discourse, and research programs. Peter Singer argues that global poverty can be eradicated through upholding the positive duty to donate money. To Peter, our ability to donate determine the obligation to operate morally. Conversely, Thomas argues that the affluent are guilty of benefiting from their imposed global poverty. They should stop inflicting further violations of human rights. The rich countries should take responsibility for global poverty through institutional reform. Peter focuses on the aid effort the affluent people can support or undertake as individuals. Thomas focuses on some structural reforms that do not channel financial resources to poor countries but on reforms that have far-reaching consequences.

Peter Singer argues that those who have the ability to assist the poor ought to donate some of their income towards relief and such other efforts. Singer posits that when a person is living comfortably already, it would have no moral significance to acquire more comfort as saving another’s life. He reports that a quarter of his income goes to UNICEF and Oxfam. Poverty alleviation remains a major worry to global economy as far as the Millennium Development Goals (MDGs) are concerned. The local elites in poor countries are corrupt and oppressive to Thomas Pogge. They misuse the military aid and foreign loans that Peter Singer proposes that they should be given (Pogge, & UNESCO, 2007). This perpetuates extreme international inequality. Thomas Pogge argues that these privileges are so lucrative so that these leaders are so lucrative so that catering for foreign governments and firm’s interests (Pogge, 2002). To Thomas Pogge, loans are not good for the poor countries.

Local leaders are to blame for many egregious and economic crimes as well as the impoverished condition of poor nations. The international global economic and political system is inexplicably shaped by wealthy societies (Rangan, 2007). This system wrongly and actively harms poor countries. To Thomas Pogge, the world’s pernicious institutions should be the point of focus. He argues that poor countries should not disassociate from these institutions but rather, they should seek redress. Affluent countries contribute towards imposition or design of such unjust institutions. Therefore, they should compensate a fair share towards these avoidable deprivations produced. Peter Singer supports Thomas Pogge in castigating absolute poverty.

Peter Singer argues that prevention of absolute poverty does not require any tradeoff of any analogous moral significance. Citizens of affluent countries have a clear-cut ethical imperative in providing aid and charitable causes towards helping the poor in poor countries. Singer acknowledges the fact that problems exist in ensuring that these financial resources rich their targeted destination (Schaler, 2009). However, such practical difficulties do not undermine his initial conclusion that affluent people in wealthy nations should help alleviate poverty. On the contrary, there are financial flows, which are illicit from developing countries. Global financial systems have no transparency and this condition has bad effect against human rights. Global financial integrity and human rights are inextricably intertwined.

When finances flow illicitly from poor countries and this inhibits provision of basic needs according to Thomas Pogge (2002). The basic needs approach is founded on the presumption on a widely and innocuously endorsed principle that it is morally in order to forgo some pleasure for the sake of relieving immense pain that other people may be undergoing such as in poor countries. He radically concludes that affluent people are immoral by not giving up luxury goods towards donating money towards famine relief. Valuing small luxuries at the expense of saving lives is thus immoral and unacceptable according to Peter Singer. Material goods should be used to satisfy human needs (Callahan, 2006). Singer argues that we have a duty to give towards poor countries.

The relative cost of saving lives of the poor is little to Peter Singer. To him, giving towards charity is neither generous nor charitable. It is a duty. Failure to give towards poor countries is wrong. Living comfortably when others are dying or hungry and doing nothing about reflects wrong behavior. The duty to trim down death and poverty is inevitable as a matter of ethical defense. The cost of reducing avoidable suffering and death in providing famine relief has insignificant moral cost. Peter Singer’s argument is applicable to instantaneous emergency food crisis and deprivation as well as long-term development aid programs. Giving famine relief is a moral obligation of rich countries.

To Thomas Pogge (2002), it is the rich countries which enjoy crushing military, political, and most importantly, economic dominance over poor countries. To him, we live in a world where genocide and effective enslavement continue unabated. This is simply unabated. Both Peter Singer and Thomas agree that helping the poor countries is a moral obligation, which is rooted completely in beneficence concept to Singer, and utilitarianism for Thomas. The beneficence principle requires necessities should be given premium over luxuries. We have a responsibility of attending other people’s absolute necessities at the expense of our own luxury. Positive rights require that we do things that benefit others (Callahan, 2006). Both Thomas Pogge and Peter Singer reached a consensus as far as utility and positive rights theories are concerned. Rich countries should assist poor countries as a matter of positive right. We should discourage a system that propagates inequality.

Peter Singer’s argument towards the responsibility of the wealthy towards poor countries limits people’s freedom as autonomous moral beings. This essay has demonstrated that our intrinsic moral values should propel us towards not behaving selfishly. Distance and the number of people from preventable evils do not curtail the obligation by the wealthy to prevent or mitigate that evil. On his side, Thomas Pogge argues that people from rich countries have a responsibility in helping the poor. This essay has illuminated the fact that enslavement and Western colonization of the poor countries is to blame for the poor condition in poor countries. Richer nations support and impose unfair global systems and structures and thus harming poor countries. Thomas Pogge emphasizes on the importance of the people from richer countries helping the poor more than governments of rich nations.

Easterly, W. (2007). The white man’s burden: Why the west’s efforts to aid the rest have done so much ill and so little good. Oxford: Oxford University Press.

Callahan, D. (2006). The moral center: How we can reclaim our country from die-hard extremists, rogue corporations, Hollywood hacks, and pretend patriots. Orlando: Harcourt.

Pogge, T., & UNESCO. (2007). Freedom from poverty as a human right: Who owes what to the very poor?. Paris: United Nations Educational, Scientific, and Cultural Organization.