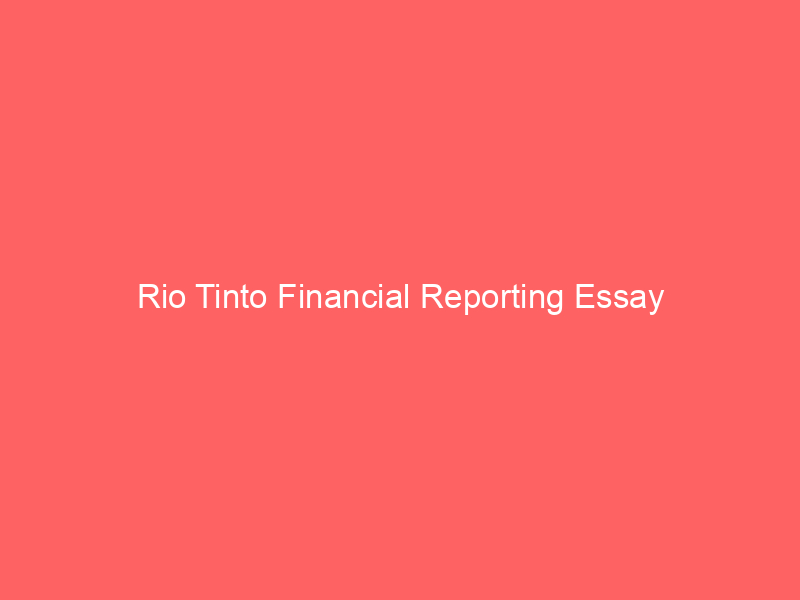 Rio tinto is a British-Australian worldwide metal and mining corporation with its head-quarter in London as well as its management office situated in Melbourne Australia. The group structure of the company comprise of the following:

A. subsidiary (51% Holding in Turquoise Hill)

The company currently owns the following subsidiaries: 51% shares of Turquoise Hill; iron Ore Company of Canada, Energy resource of Australia and simfer jersey. In this regard, Rio tinto has voting right in the subsidiary companies since investment in a subsidiary according to IFRS provides that the parent company must have a voting right on a subsidiary investment while the subsidiary gets their share profit in relation to portion of the non-controlling interest.

Rio tinto limited has entered into a joint venture agreement with Hope Downs. The contract was agreed upon and amendment to memorandum of association as well as the article of association was effected. Consequently, joint venture and their relevant groups function, jointly as a distinct economic venture, with neither assuming a leading position. The amalgamation drawn in no amendment in the legal possession of any assets of Hope Downs or Rio Tinto Limited, nor any modification in the possession of any present shares or securities of Hope Downs or Rio Tinto Limited.

The company as an associate investment in Gladstone Power Station worth of 42.1% .The Company deals in power generation. In this regard, the international financial reporting standard as well as the Australian accounting standards provides that the parent company will not consolidate the books of the associate venture but instead the parent company will account for share of profit from investment in associates.

Preparation of consolidated statement by the parent company

According to international accounting standard (IAS 27), the standard outlines the circumstance when an entity should consolidate another company as well as the manner in which the change in ownership on interest is accounted for (Gibson, 2010). Rio tinto prepared the consolidated financial statement inclusive of the subsidiary entity since; the company has a 51% or more shareholding and thus Rio tinto has a voting right in the subsidiary companies. In this regard, Rio tinto limited will prepare a consolidated financial statement as well as ensures that the non-controlling interest is prepared since; Non-controlling interest depicts the amount of reported net profit that is fully entitled to the subsidiary company.

On 24 April 2012 the Chalco consortium purchased 47% equity significance in Simfer Jersey Corporation. The Rio Tinto’s interest was reduced from 95% to 50.35% which is a change in group structure and portion of the non controlling interest from direct to indirect. In the year 2013 Chalco limited disposed off its interest to Chinalco limited which is its parent company

Intra group balance is accounted for and eliminated in the inventory account as well as the debtors and receivable account since, a company can acquire shares of a subsidiary entity with its debt as well as account balances and this must be accounted for. Intra group transaction and balances is therefore an important part of the consolidation process since, company indebtness must be eliminated before the transaction is fully documented, the financial statement will not portray a true and fair view of the company’s financial situation and thus the going concern assumption of the company will be queried hence inter-company indebtness must be eliminated.

The company has foreign company namely; the New Zealand Aluminum Smelters Limited registered and operates in New Zealand. The international corporation has been accounted for in the consolidated financial statement as a subsidiary company with care given on the foreign currency translation (Clyde Stickney, 2009). The accounting standard command that a foreign entity must have its financial statement documented by the parent company and the transaction must be in local currency of the head office. In this regard, the need for foreign currency translation is to help parent company to identify whether there is a gain or loss in exchange currencies.

A. The Audit committee

The audit committee of the company are bestowed with the responsibilities of assisting the board members in monitoring the in decision as well as process designed in order to guarantee the truthfulness of the company’s financial statement ,enhanced risk management practices as well as ensuring that there is sound system of internal control is put into practice.

According to page 57 of the notes to the financial statement, the corporate governance report is depicted. Rio tinto assume a unified method to the governance policy to comply with statutory obligations concerned with the three principle stock exchange listing in the United Kingdom, united state as well as Australia this are external policy as well as an obligation to the company that ought to be adhered to (Bruner, 2010). The company’s corporate governance policy is a diverse policy that both considers the internal factors that ought to be adhered with such as approach to re-election of new board members as well as the annual performance of the board members.

According to page 62 of the financial report, the company has a sustainability committee bestowed with the responsibility of helping the board with managing long term planning designed to administer the social as well as the environmental exposures, administering management processes and standards and ensuring that compliance with social responsibilities and commitment is fully met (Colley, 2003). The Committee appraises the efficiency of the management as well as procedures concerned with corporate social and environmental responsibilities

A. Subsequent event after the balance sheet date

B. The liquidity position of the company

Calder, A. (2008). Corporate Governance: A Practical Guide to the Legal.