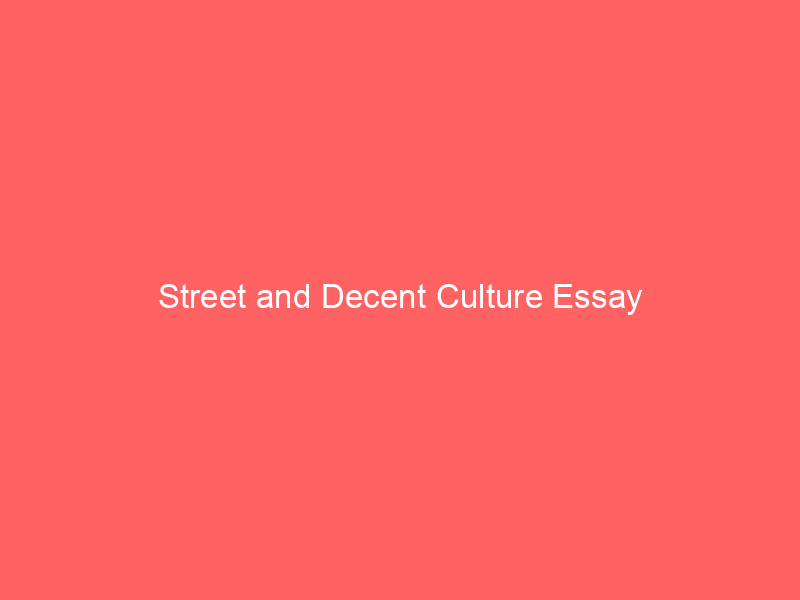 Essay on Street and Decent Culture

There is a significant difference between what is termed as street and decent culture; notably, this is due to the different practices that uphold and develop the two different cultural themes that must coexist. Decent culture includes values held by respected families based on hard work, respect for other people and their property, advocating for safety rather than violence, and creating good relations with others. On the contrary, street culture is driven by the need to survive different scenarios and events that threaten to affect not only security and respect but also the lives of residents. As a result, individuals have to act tough, take back what belongs to them, accept challenges but show masculinity and street smartness to overcome the challenges, and prove that they deserve the respect of others. Anderson, Elijah in The code of the streets to the street rules, argues that one can earn the respect of fellow residents by responding to challenges through violence and unlawful acts (Anderson, n.p). The difference between street rules and decent expectations bring about conflicting ideas and cultural practices where children and individuals from both environments must adapt to the general environment and establish an image based on what they deem as dominant culture. This essay reviews some of the body languages and street performance that support or discourage violence and masculinity when compared to respect, honor, and non-violent resolutions as necessary survival virtues and cultural practices.

In The code of the streets to the street rules, Anderson argues that street rules and cultural conduct affect different people in varying proportions depending on the social class and everyday activities. For instance, the majorities of the low-income individuals face the street rules and have to respond appropriately to different situations in their daily activities. However, this cannot be compared to the lives of the street youth who have to keep up and adopt these rules in every aspect of their lives assuming that this is the only way to lead their lives. As a result, the absence of strong social and cultural rules creates room for improvement and encouragement of street norms where masculinity and common sense earns respect while honor and humility are discouraged. The majority of young people adopt these virtues as accepted practices; however, others engage in drug use due to violence, racial and other types of discrimination, and low income that increase their anger and despair. They also lack important resources and financial stability, which can be used to elevate their living standards as they turn to violence, theft, and other forms of crime to earn an income, stay happy and respected, and survive every day. This reduces their respect for the community and laws that regulate bad behavior since taking them to prison only hardens them and increases their street respect (Anderson, 102). Evidently, this is contrary to decent norms where decent families earn income and other resources from legitimate activities for instance hard work, nonviolent ways of expression such as the use of talent and innovation, and development of a safe environment by extending their goodness to others by improving broken relationships. The difference has led to the development of an opposition culture where the street culture opposes the decent culture while the difference in economic endowment, race, and social factors increase the demand for street culture as the only way to survive in the mainstream culture and environment. As a result, individuals with decent culture must, at times, adopt street practices to deal with challenging situations.

Body ritual between the Nacirema and the Performance of Masculinity

Horace Miner presents a similar argument “Body Ritual among the Nacirema” where he reviews a community’s way of life by evaluating its cultural practices to establish the most absurd practice by human beings. Irrespective of the assumptions that every community is different as a result of different cultural practices, the author establishes that these practices are almost the same in different communities and people have devised different ways to achieve what they perceive as socially and culturally acceptable in their communities or the wider environment. According to the author, the Nacirema villagers must follow set cultural practices and rituals to be accepted in the community and to live harmonious lives; this includes setting up a shrine in every homestead where the elder family member is considered as the head of the shrine; as such, he or she leads worship activities (Miner, 83). Irrespective of the difference in financial stability and availability of the resources, the rich and the poor must establish themselves as part of the community by following these rituals. Markedly, this has led to the development of social and spiritual hierarchy where the poor look up to and, at times, copy the rich ways of worship through creativity and innovation to make their shrines similar to the one used by the affluent families that have precious objects.

The spiritual hierarchy consists of priests, medicine men, and ‘holy-mouth-men’ that speak blessings or foretell about the lives of the people. The most respected ritual is the latipso ceremony also considered as a purification ceremony where the sick and demon-possessed individuals seek redemption. According to the Nacirema people, the ritual can include body piercing, putting objects, and food on the mouth of the patient as a part of the treatment process, and expose the individual’s nakedness to traditional healers as well as helpers. Notably, this is contrary to individual respect for privacy and healthy living since patients are exposed to torture and mistreatment. Markedly, the medicine people are respected among the community members and given hefty payments by individuals who participate in the purification process or for their ‘holy-mouth’ activities irrespective of the fact that the majority of patients succumb to their illness and the purification mistreatment. This element confirms the assumptions held by Anderson that people strive to meet their cultural expectations and behavior to gain respect and build a reputable image in the community irrespective of the implication of the cultural practices. Similar to Anderson’s assumptions, culture is a way of expression and is built by the various norms and practices that may not necessarily coincide with individual interests. However, people must acknowledge and adopt accepted practices to survive and earn respect in the community.

David Grazian in The girl hunt: Urban nightlife and the performance of masculinity as collective activity claims that the majority of the college students tend to form groups to ensure their social security. However, as they grow old, they change these standards and rely on other aspects, for instance, colleagues, financial resources, and other connections that make them accepted and respected in the community. Accordingly, this leads to them indulging in nightlife governed by aggressive sexual and masculinity talk, which is chaotic and discourages young college individuals (Grazian, 126). According to the author, college groups and workmates late hours parties form different sources of security, while each must gradually transform from one stage to another while adapting various cultural practices to increase their survival chances and to be respected in the society.

Grazian, David. “The girl hunt: Urban nightlife and the performance of masculinity as a collective activity”. “The practical skeptic: Readings in sociology”. Edited by McIntyre, Lisa. McGraw-Hill, 2011. 119-134.