The Truth about Climate Change 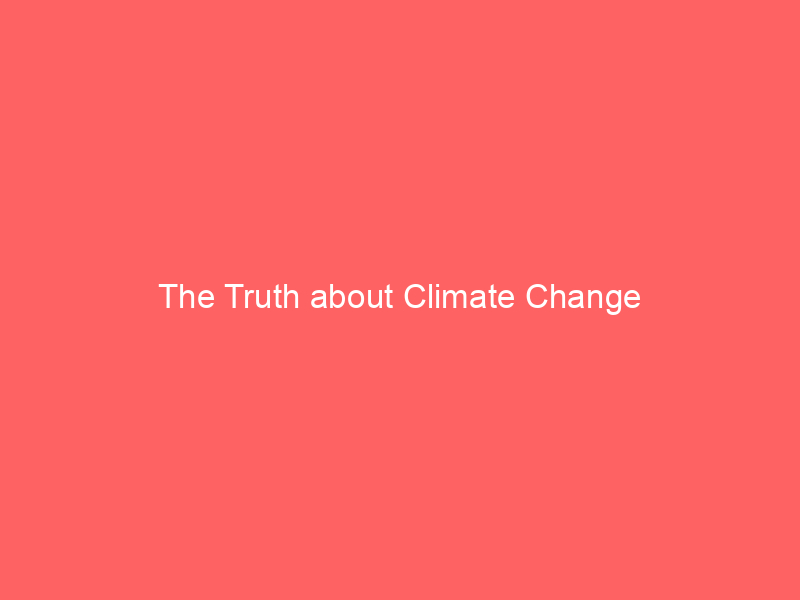 Sample Essay on The Truth about Climate Change

This paper aims at exploring climatic change which is a serious issue and is of great concern for environmental researchers. This problem is not only associated with climatic changes rather it associates with several health-related issues. These issues impact atmosphere, environment and people living in affected areas. Issues such as heatstroke and increasing temperature are increasing day by day (Change, 2016). Statistical methods for application of climatic change have been summarized which show development of problems with nutrition, infections and mental health of human beings due to change climate. Climatic change affect not only the humans but also animals living on planet earth. The changes which are being observed are directly associated with melting of ice-capped mountains and increasing level of sea. The health of people is also significantly impacted due to factors of climatic change which shows linkage between human behaviors when there is instability in surroundings. The associated issues have been identified which links with results of findings (Seinfeld & Pandis, 2016). These findings are associated with the development of remedies through the use of technology which assists in developing solutions for the effective resolution of problems.

The Truth about Climate Change

The surface of the earth is warming up comparatively with the passage of time. The evaluation of climatic change has been observed by researchers from over a long period of time. The evaluation of temperature changes is observed at both land and ocean surface from across the globe in order to estimate changes and depict predictions about future changes (Intergovernmental Panel on Climate Change, 2015). Observation of statistical figures acquired from understanding tree rings and ice cores assist in understanding temperature change. The estimation of the temperature of Earth from 1983 to date shows record hype in recording of period ranging more than 800 years. The change in temperature in lower atmosphere areas shows a drastic decrease in snow and ice covered areas. This is impactful on decreasing the northern hemisphere ice sheets which eventually increases the sea level (Change, 2016). This is a significant measure for observing that overall climatic variation is possibly impacting across the globe which is a clear indication for temperature hike.

The climatic change is damaging for the planet and at the same time it is expected to cause increasing damages on human health. Age, gender, geography and socioeconomic factors are aspects on the basis of which catastrophic risk increases hazards which apply to human health (Seinfeld & Pandis, 2016). Floods, drought and heat waves are environmental impacts which shall result in problems such as power outages, undernutrition, occupational hazards, infectious diseases and mental health. Increased temperature will increase carbon dioxide in the air which will damage the crop growth and hence result in price hike (Change, 2014). Labor work shall become difficult as increasing temperature shall cause severe problems for workers. This shall also associate with health hazards as infections shall increase with enhanced humidity. Calamities shall increase which shall link with health hazards and shall associate with the development of problems like anxiety, depression and suicide.

Climatic change is increasing the level of floods, droughts, hurricanes and tornados. The lower atmospheric temperature of the earth is changing and becoming warmer with the passage of time. This is rising the challenges for future weather conditions which is increasing rainfall and snowfall and at the same time enhancing the chances of floods (Melillo, Richmond & Yohe, 2014). Different weather conditions prevail with the change in region which is evidently seen across the globe. The area of study of climatic change differentiates from global warming. Climatic changes are associated with an understanding of changing temperature of environment which includes melting of ice-capped mountains. This increases the level of water in seas and oceans which shall bring a dramatic change in temperature and hazardous calamities such as floods and droughts (Mach & Mastrandrea, 2014). The impact of this change can be observed in different global segments which associate with changing temperature levels. Global warming is a mere terminology which interlinks with the increasing level of temperature across the globe and does not link with the changing effect on the climate.

The impact of climate change is visibly observed on wild life animals too. The change in temperature and structures of ice-capped mountains has forced the breeding bird to find new grounds. As per research Sumburgh Head is considered as one of the oldest and rockiest lighthouse spur which allow colonies of seabirds in Britain to breed. Several puffins and guillemots are found in this vicinity where breeding process is continued. The change in climate has forced the birds to move along elsewhere and find new place for breeding (Intergovernmental Panel on Climate Change, 2015). The number of visits made by the birds has reduced due to change in temperature which has become highly unfavorable for the birds. This is the case with other segments of food chain across the globe. The trends and patterns of animals are changing which is not a good indication for localities. It is up to the respective environmental controllers to access the situation and devise strategies using which solutions and alternates can be crafted.

As per statistical evaluation significant temperature changes have been observed on global surface temperature and average temperature that people are exposed too. This change is interlinked with the changing climatic changes and hence shows a dramatic change in the environment (See Appendix A Global Surface Temperature). The similar analysis of people being exposed to heatstroke over the years has been shown in graphical representation below which shows that climatic change has a huge impact on lives of people and is impacting on their lives significantly (See Appendix A People Exposed to Heatstroke). The temperature change in the Asian countries has observed a significant change. It has been noticed that people are being exposed to changing temperature and this is because of the climate change. In some of the regions the temperature is falling whereas in some of the region temperature rises significantly. This can be observed through statistical collection of data which shows a dramatic increase in global surface temperature and at the same time links it with number of people increasing towards exposure towards heatstroke.

Asia is considered as the continent which is most severely impacted by the factors of climatic change. This is mainly because of the population with an estimated 2843 weather-related disasters happening in between 1990 and 2016. These disasters have impacted on lives of 4.8 billion people which has resulted in more than 500,000 calamities and deaths (Schuur, McGuire, Schädel, Grosse, Harden, Hayes & Natali, 2015). The relation between increasing disasters and global volume of death is merely minimal as per the survey conducted by researchers. The countries in Asia are significantly impacted as they are nearer to the equator which is a central point of planet Earth. Climate change is a topic which has been in argument for a quiet a time. The researchers have on several instances confused the topic of climate change with global warming (Crate & Nuttall, 2016). Clear evidence of existence about concept of climate change is not visible in theory. This shows varying view about the topic by various researchers which shall be addressed through enhanced findings and expanding research outreach.

Climate change is considered as one of the most serious issues which is being faced by the modern world. The territories of earth are changing because of climate change which shows a raise in sea level and melting ice-capped mountains (Melillo, Richmond & Yohe, 2014). Varying views of researchers show that some agree with impact of climate change and some don’t. The impact of climate change has shown a record increase in temperature across the world. This can be related to the increasing global average surface. The researchers have developed varying views about climate change and global warming. The terrifying fact is that both are extremely different facts and require solutions for allocating problem solving remedies (Mach & Mastrandrea, 2014). This can be understood through evaluation of ice melting at the Arctic Sea and increasing levels of water across the globe. The change in climate has impacted on several villages and water affected areas which is requiring displacement from the people. The water resources are reducing with the passage of time. This can be observed through damaging water levels at the Great Barrier Reef which shows results of climate change.

Other lethal observations of impact of climate change is observed through increase in acid level in the water. The statistics of increase is increasing day by day. This shows a change in chemical composition of contamination of water. The changing climate is also resulting in increased global flooding which is increasing with the passage of time (Urry, 2015). The researchers have identified facts of an increase with greenhouse gases which also shows an increased composition in comparison with history. The rising changes and increasing contamination shall undoubtedly further increase warmth of planet Earth. The changing temperature is immensely damaging for the nature and health of both animals and humans.

The aim of researches which have been conducted for explaining climatic change are associated with finding solutions relevant to understand impact which climatic change has on the atmosphere and other associated factors which enhance outcomes of increasing climatic change (Kelley, Mohtadi, Cane, Seager & Kushnir, 2015). Several factor impact on lives of people due to the increasing climatic change. These are mainly associated with health-related issues and psychological issues which increase due to unstable environment of life. Climatic change is a serious issue of modern time as increasing temperature is increasing the hurdles along with challenges. Through the analysis of this topic a further understanding is developed for understanding physical mechanism which greenhouse gases have on climatic changes (Watts, Adger, Agnolucci, Blackstock, Byass, Cai, & Cox, 2015). The concentration of gases have increased with changing human activities. The carbon dioxide content in atmosphere is increasing challenges damages the natural ecosystem. This is linked with increasing temperature which further increases damage to the surface of earth and causes health issues to the human beings. Through appropriate research and usage of technology in the right direction, suitable solution can be crafted for supporting the findings. 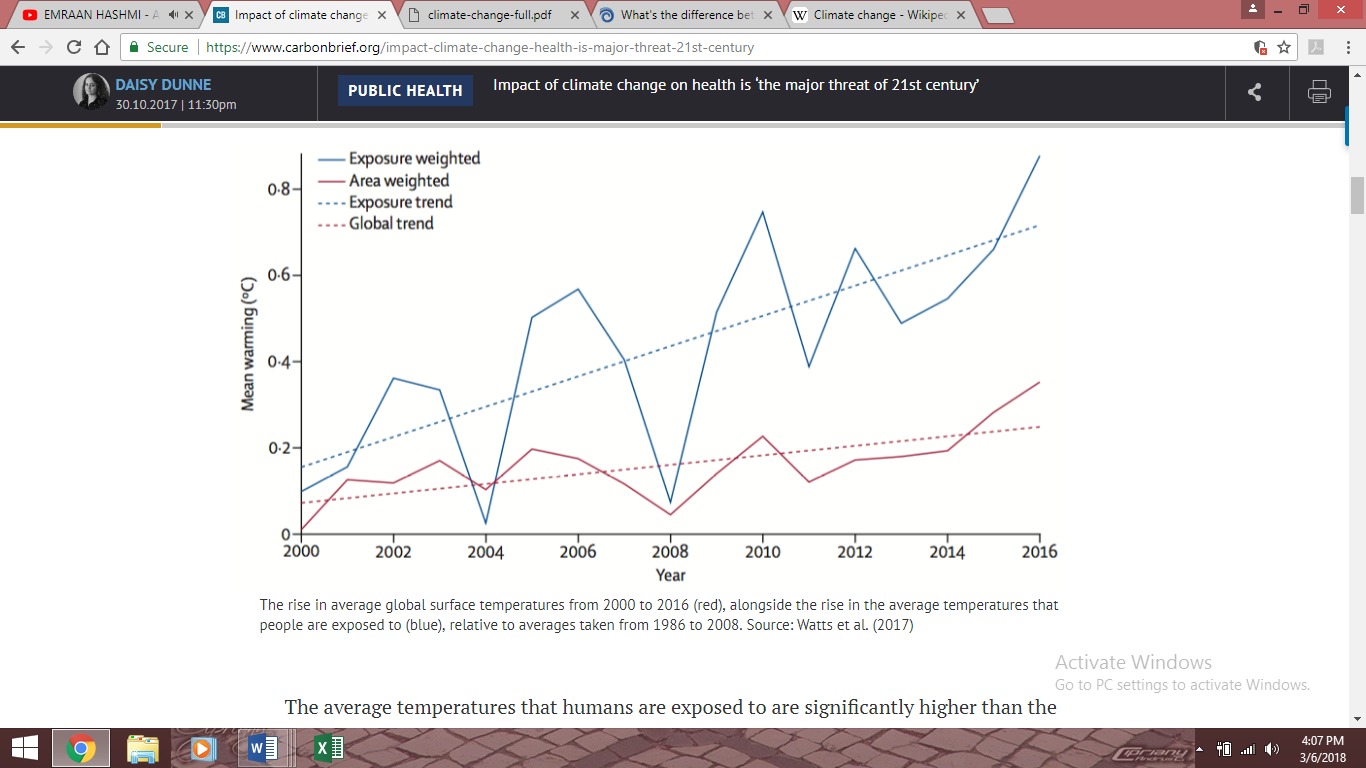 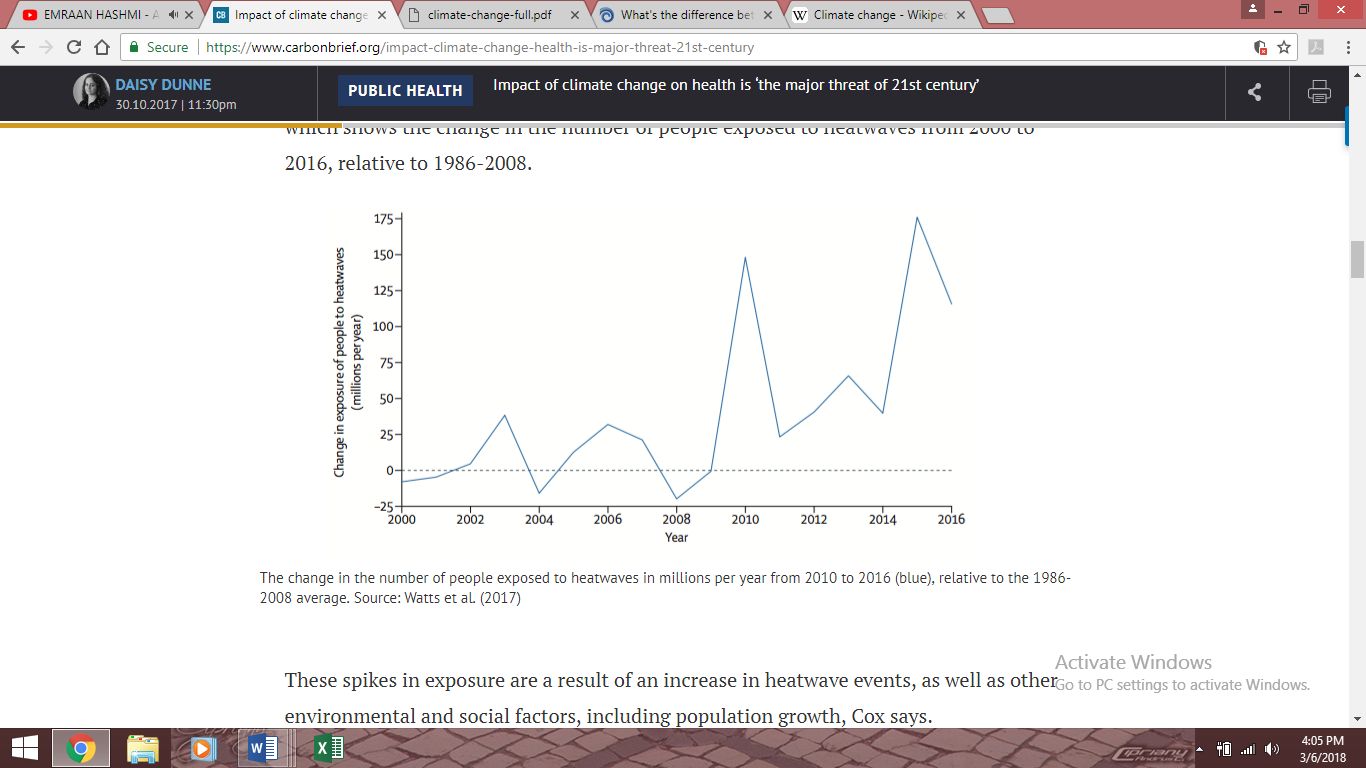