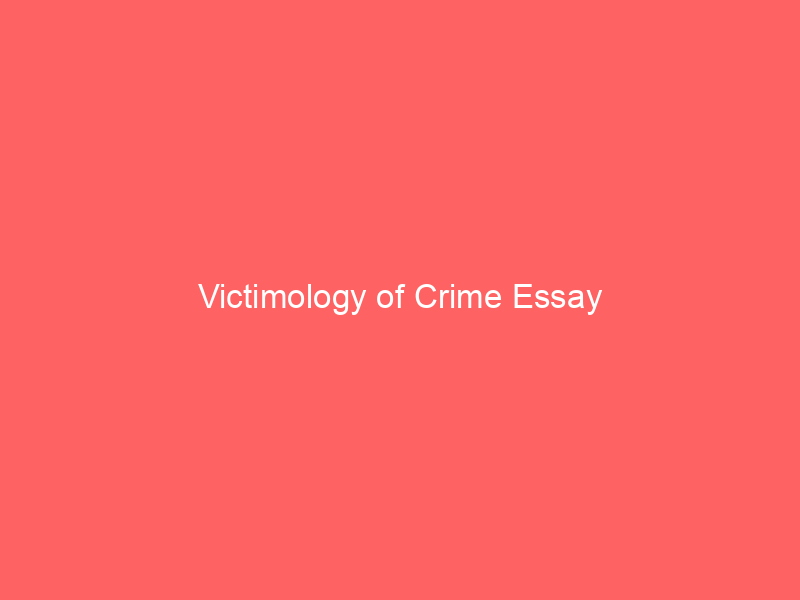 According to Mayhew and Dijk (2012), analyzing the surveys with the help of victimization surveys including the details of the victim are still considered as new way to study crime in practice. In the such surveys, a small portion of the population or community is selected and then asked whether they experience any sort of crime in the recent days. In addition, these surveys ask the reasons like whether the victim wanted to report the crime to police or not. Due to such surveys actual count of crimes taking place in, a certain place can be determined (Elliott et.al, 2013). It is not a surprise that the number of crimes reported from such surveys always differ from the police counts.

Keeping the above mentioned factors under consideration recently the South Australian’s Police Chief claimed that the area under his jurisdiction can be considered as one of the safest place in the country. As a proof of his claim a report is presented showing the area under then mentioned police chief as the safest place in the Australia. However, as mentioned in the previous sections sometimes the victims don’t want or the attitude of the police is not friendly enough for reporting crimes. In this report, the “bold” statement of the police chief are analyzed in the light of victimology and practice of the people to report crime to the police.

The first concept which can be considered as a hurdle in reporting of the crime to the police is known as, “fear of crime”. According to Hatfield (2001), the “fear of crime” is the fear created in the population by witnessing the external situations of crimes and victims and is considered as one of the major threats to safety of an individual in the society (Jackson, 2012). The fears create an emotional response in the people which shape their perceptions about a certain crime. Fear of crime and insecurity also results in several psychological disorders like isolation and anxiety (Hatfield, 2001). When the people don’t feel safe they sort to other resorts like keeping a weapon, consume alcohol and drugs, mistrust in the authorities and fellow people and most dangerous behavior is the fact that such people are always unwilling to help fellow human beings.

In the light of the fatal consequences of the “fear of crime” narrated above it is necessary to the local communities, authorities, police and the State Government to identify the factors contributing to the “fear of crime” in their areas (Hatfield, 2001). After their identification, the authorities and representatives, of the community should sit together to adopt a strategic plan for combating such factors (Jackson, 2012). The governments and especially the Department police should share the actual crime reports from their areas to reduce the fear of crime in the people of the community (Jacoby, 2017). Disclosing the actual number and extent of crime to the public can reduce the anxieties, depression, and exaggerated created by the numerous sources regarding a crime.

Domestic violence and crimes are often not reported to the police as the victims are already suffering from several problems and often don’t want any trouble with the authorities. In the past few decades, various legislation and resources were allocated to the issue of domestic violence and policing structure (Eigneberg et.al, 2012). These laws have proved to be effective and saved numerous lives. However, it is also felt that that the police training should be adequate and the officers should be educated about the new laws on regular intervals to counter domestic violence (Hart, 2011).

The problem of proper training and resource allocation has been identified by the authorities and now there are several training programs and resources committed to train the police officers for domestic violence cases (Eigneberg et.al, 2012). The policies are established and in them details are available for police officers for responding to a domestic violence problem, what investigatory policies should be implemented, and finally what referral procedures should be adopted by the officers at the crime scene.

According to Cohn et.al, (2013), rape is one of the major offensives which are not reported to the police especially from the women suffering from drug or alcohol addiction. The main problems researched by Cohn et.al, (2013) were:

a. The relationship between the rape offenses and reasons for not reporting to the police.

b. The relationships between the above point and the rates of rape cases.

Cohn et.al, (2013) conducted a phone survey and found out three main reasons for the victims not reporting the sexual assaults to the police. These were:

a. The victims don’t want anyone else to know about the incident of rape.

b. Most of the victims don’t understand the forms of rape and don’t admit as a criminal offense.

c. The victims are suspicious about the criminal justice system and their public images.

The solution for such problems consists multiple actions and allocation of the resources. Education of the women can play an important role for the identification and reporting of sexual misconduct (Diemer et al., 2016). The women can be educated about unwillingness for sex, incapability due to drugs or alcohol, and the acts of physical harm and injury during the intercourse should be regarded as rape and reported to the police (Diemer et al., 2016). The educational programs focusing on the different types of the rape and their impact can also have an impact on the victims, police officers, legislative representatives, and the community’s perception about sexual assaults (Diemer et al., 2016). The authorities especially police should work to reduce the myths attached with the rape offense and thus can increase the willingness of victims to report the incidents.

Carlos (1997), effectively summarized the benefits and the factors affecting the reporting of crime to the police. The decision to report a crime to police has positive impact on the life of victims and others in the community. Some of these points are highlighted below:

a. The victims of the crime are compensated by the authorities as well as insurance companies.

b. The trend of not reporting the crime to the police results in statistical errors and law enforcement agencies are not capable of handling them.

c. Helps in the strategic planning for the police.

The factors which are offering the ability of the victims to report the crimes to the police can be summarized below:

a. Seriousness of offense creates fear and thus reduce the rate of reporting.

b. Negative attitude towards police.

c. Past record of the victims stopping them to have troubles or contact with the police.

d. The relationship of the victim with the offender.

The statement of the Police Chief in the South Australia is a typical case of denial by the authorities. The only report he had was an official report claiming of having reduced crime rates in the jurisdiction of the Police Chief. The Chief of Police admits the fact that the reporting of crime is much easier due to advancement in the communication technologies. Now the police can be notified of crime with the help social media, internet, and journalists rushing to the crime scenes (Kesic, et al., 2011). Sometimes the details of the crime scene are also available from such resources. Despite the knowledge of such technologies and sources of information, the Chief of Police is simply ignoring the reports published by the agencies like Adelaide Advertiser. This report indicates that the concerns of the citizens regarding the crimes in there are has increased significantly and ignored by the authorities.

The good thing in the above mentioned scenario is the fact that police department is trying its best to improve its reporting and investigative infrastructure (Kulkarni et.al, 2012). Today, the citizens of the state can report the crimes by using the sites like Facebook and Twitter as the department has established their pages on these locations (Suttles, 2013; Tarling and Morris, 2010). On the other hand, the information provided on such sites is often exaggerated and there certain myths which are assigned to a particular crime. To help reduce these inconveniences the department is publishing their statistics. The police plan to achieve the reduction in the “fear of crime” by following this strategy. The Police Chief hopes to reduce the gap between fiction and reality by a publication of the offense details and statistics publically. However, the privacy rules for the identity of victims and offenders are still under development and must be addressed in an efficient manner (Crump, 2011).

All in all, the crimes reported to the police are always less than the actual rate of offenses taking place in a particular area. There are many factors which affect the proper reporting of a crime to the police. Recently, the Police Chief of South Australia claimed that the area under his jurisdiction had seen a significant decrease in the reported crimes. Most of the crimes taking place in his area are organized crimes. On the other hand, the survey conducted by the independent organization revealed that the concern of population regarding the crime rate in their communities have increased. There are several factors behind the gap between community and police which were discussed in the present research. On the positive note, the police are positively committed to reducing such crimes.

Hatfiled, F. (2001). THE IMPACT OF CRIME: FEAR AND CONCERN IN REGIONAL CONTEXT A STUDY OF TOWN SIDE A STUDY OF TOWN’S VILEE. Impact and Prevention of Crime in Regional Australia, 3(5).

Jackson (2012). Gender and Fear of Crime : Assessing the Impact of Fear of Sexual Assaults on Women’s Fear of Crime. Journal of Korean Public Police and Security Studies, 8(4), pp.169-193.