Who Invented School and Why 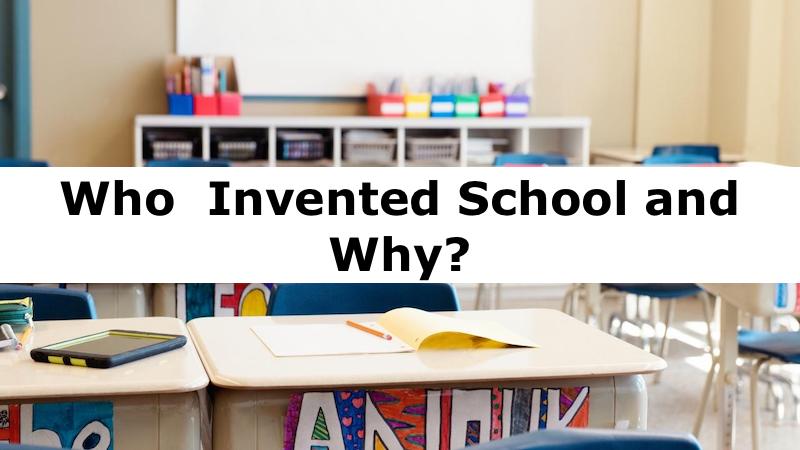 Who invented school? The concept of school as a place where students go to receive an education has been around for hundreds years.

Yeah, right! Before schools were invented kids played and learned from each other. Schools are not good because kids only play at recess, sit silently in class, don’t use time well: waste time, and miss their classwork.

School was invented to teach kids right from wrong – good things that will make them better people. School teaches kids to obey the rules and be responsible. Schools are a place for learning. Kids go there because they have no choice. You must go to school until you’re 16 or longer if you choose to go to college.

Kids today were taught differently in the past. They played more with their friends outside and weren’t “spoon-fed” information by teachers. Schools used to be small, there were not a lot of students at each school. You had one teacher for each grade or subject you were learning: If it was math you would have one math teacher, and so on. Kids were taught what they needed to know for their future lives.

In modern schools kids go to learn about history, science, literature and more subjects that are not necessary but will help them in the long run. School teaches you how to solve your problems without violence or yelling at someone. There are more opportunities to be successful if you know how to read and solve problems.

School was invented to teach elementary aged kids the skills they need to know in order to be successful in life. Kids learn how to read and write as well as math, science, social studies and more.

The first known school was found in Egypt around 3800 BC. Classes were for the elite children only. It’s not exactly known when schools became available for everyone but it is believed that Ancient Greece had public elementary schools around 500 – 300 B.C.

Until the twentieth century, most education was informal. There were no schools or teachers. Parents taught their children at home. As societies changed and became more industrialized, parents started sending their kids to outside schools so they could learn skills that would help them get jobs when they got older. That’s why most people agree that school was invented in the early 1900’s after industrialization had taken place.

Evidence suggests that in ancient times, schools existed in Mesopotamia as well as other parts of the world. The first evidence of what we would today consider a school can be found in China around 500BC and India from about 800BC. Schools were considered an extension of the family and were modeled after it.

Some believe that schools came into existence because of social changes like industrialization and population growth caused people to move away from their villages and spend more time together in towns where they had fewer practical skills or knowledge to fall back on.

Does modern schools support the reasons why school was created?

Today school is part of almost every culture in the entire world and it has become a necessity for all students. Kids attend elementary school from kindergarten to 6th grade (7-11 years old), middle school from 7th to 9th grade (11-14) and high school (14-18). Schools are very important and useful but they also have many problems.

Children are taught what to think, not how to think. Children never have a chance at figuring out things on their own or making their own decisions about the world.

There is no creativity in school; students only learn facts, and when they have an opinion that conflicts with their teacher’s opinion they are punished for being wrong.

They aren’t even allowed feelings about subjects because then they would be considered “sensitive,” and therefore need psychological help according to teachers. Schools teach how to work hard so you can achieve your dreams of having a good job and doing things correctly.

You go there because you don’t want to get in trouble by your parents because if you skip too many days of school too often, your attendance will drop below 50% and more of the schools funding will go to your school.

Kids get punished for not going to school or not obeying the rules set by their teachers. Kids learn from other kids, so they need freedom in order to learn effectively.

They also don’t have enough time on their hands since they are working hard at being responsible members of society – taking care of themselves, doing their work, getting involved in extracurricular activities that will help them in life such as band or sports.

Schools teach how to solve problems instead of teaching students what they want to learn. Teachers give out homework and assign projects because they have a lot of students and know that some kids do better when given extra work so they can “sink or swim.”

In his article “Why School?” Paul Hirst suggests that there is a serious problem with today’s education system because it does not teach students the skills they need to be successful in life.

It focuses on schoolwork, like math and science, rather than giving kids experience doing things outside of school like working or taking care of their own money. He believes schools should give kids more opportunities to develop outside interests and learn practical knowledge, such as being able to cook their own meals or drive safely.

It was once believed that kids shouldn’t be given too much freedom when it came to learning because they weren’t ready for it. But Hirst says that this isn’t true at all in the 21st century. Kids now need to learn how to be more independent because they will have many more responsibilities when they become adults. They need a better education to help prepare them for jobs in today’s world.

Some people think schools shouldn’t change their curriculum at all and keep focusing on subjects like math and science because those are the skills students will use the most in their future careers. But others disagree saying that kids also need to learn about certain things outside of school, especially if they don’t plan on going into a career like medicine or law where schoolwork is important. They want schools to teach kids things like cooking, money management and driving.

Both sides have good ideas. In my opinion schools should give kids more freedom to learn about what interests them and help them prepare for the future with schoolwork too.

Some people think that the school system is good. Others disagree and say it was invented to mold children into similar “thinkers” which is very different from how schools are viewed today. They were meant to be a place where knowledge was shared, not forced upon students by assigning work or homework. Disagreement over what an education should entail is why some believe that school had to be invented, while others assume since it has always existed.