How to start a descriptive essay 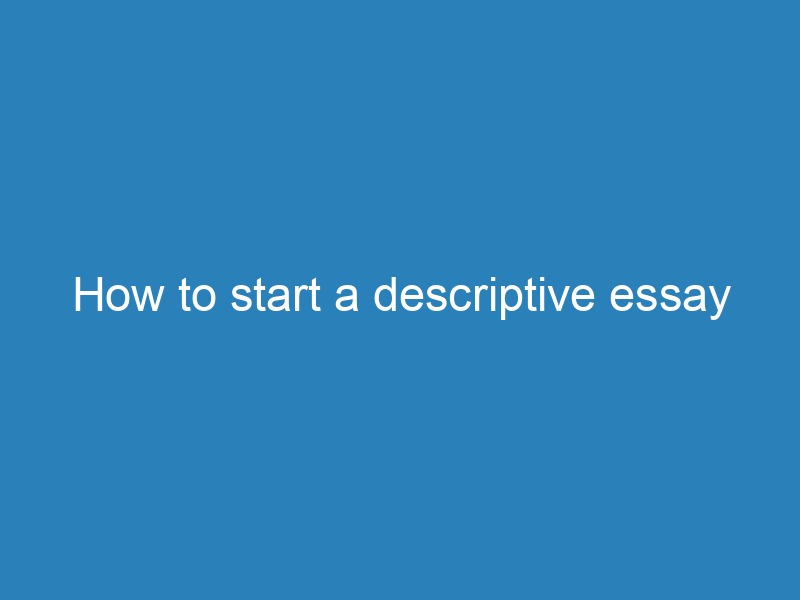 A descriptive essay needs a good introduction for the same reason that any other kind of writing needs one: to make readers curious and interested in what you’re going to write about.

Writing an introductory paragraph for a descriptive essay can be tricky, especially if you’re not sure what it should include.

Here’s how to make sure you get it right every time:

It can be tempting to make your essay sound boring by focusing only on the facts, but if you want to impress your readers then lay off the numbers and try using interesting adjectives instead. If the reader doesn’t feel like what you’re describing is an enjoyable experience, they won’t keep reading!

Starting a descriptive essay isn’t an easy task, but it’s not impossible. You need to describe a specific scenario in such a way that the reader can visualize the scene as you write it. Here are some basic guidelines for starting your descriptive essay or any other descriptive piece of writing:

If you’re writing about something everyday, don’t try and include every aspect, instead select just one or two things to focus on. For example if you’re at a party, rather than trying to explain the entire room, select just one area (such as where people were dancing), and then concentrate on just that section of the party. The same goes for any other scenario – school halls, public parks etc.

If you begin your essay with the best description ever but then lose focus and describe every aspect of the scenario, your reader will be disappointed. To avoid this, keep your writing focused on just one or two aspects (as mentioned above), and try to make them stand out by using adjectives that evoke strong emotions in people. An example would be something such as: “It was a dark night as I stood watching my house burn down.” This immediately piques the interest of the reader because he/she is curious about what caused this explosion!

Don’t agonise over how best to start your essay; just get straight into the action! This will keep your reader engaged and interested in what you write.

If there is one particular thing that is integral to your scenario, and you want to make sure it’s the first thing that your reader sees or hears, then describe it before anything else. The same goes for any other aspect of the scenario – describe this as soon as possible so that when your reader reads on they’re not confused by what they see. If writing about a party again, try beginning with: “I was at a party and everyone was dressed up.” This immediately describes the scenario without leaving any questions unanswered.

It’s very hard to write a descriptive essay without mentioning more than one sense (sight, sound, smell, touch, and taste). This is because your readers will have no idea what you’re referring to if you don’t say how it feels or looks. Although it may seem impossible at first, once you start using lots of senses in your paper the words will come naturally!

Describing an event or scenario is slightly different to simply describing something. If you’re writing a description of a party, then the plot line may follow your journey throughout this particular party – you might talk about how you arrived, met people and danced etc. On the other hand if your purpose is to describe what the party itself was like (rather than what happened at it), then it’s okay to go off on tangents occasionally. Using our example again, rather than concentrating on a chronological narrative structure (arriving at the party; meeting people; dancing etc.) try beginning with: “The music was so loud that I couldn’t hear myself think.” This isn’t directly related to anything else in your essay but describes an interesting aspect of the party. Then you can move on to describe how you arrived at this point: “I was having so much fun that I couldn’t help but join in!”

If there are certain aspects of what you’re describing that need special attention, then keep these paragraphs separate from the rest of the descriptive piece by making them stand out in some way (such as by using a different font or text alignment). This allows your reader to concentrate on just these parts and enjoy reading them without being distracted by any other elements.

One of the hardest things to do as a writer is write an intriguing, interesting introduction. If your introduction doesn’t pique interest then people won’t bother reading on! Begin introducing your essay by using powerful words and phrases that set the tone for what’s about to be written. For example, beginning with “It was a dark night as I stood watching my house burn down” immediately catches the reader’s attention because it sounds like something exciting has happened or is happening; so they want to know what caused this explosion!

Once you’ve attracted their attention, ensure that your next few sentences don’t let the reader down.

The fire started at about eight o’clock in the morning. It was a dry day, and we didn’t have any water stored, so every time my family tried to douse the flames they would flare up again almost immediately. Smoke billowed across our lawn and into neighbouring gardens, covering everything with an eerie green mist that refused to clear away as night drew on. I couldn’t watch any longer; I was choking on the fumes from our own house so turned around and fled as fast as I could into town where I sought refuge in a café. This introduction provides lots of information but is still interesting because it begins with something dramatic (the fire beginning) then tells a story (dealing with the fire) and finally an explanation (the clouds of green smoke).

The writer has also used several very short, snappy sentences that get directly to the point without any elaborate descriptions or storytelling.

This makes it easy for readers to digest this information quickly then move on to the body of the essay.

In contrast, if you’d begun your essay introduction by saying instead: “On a warm day at around 8 am I was standing in my back garden watching as smoke slowly drifted along our lawn and into neighbouring gardens. My eyes started to sting from all the fumes so I turned away from them and dashed into town where I sought refuge in a café” this would be far too wordy. The shorter sentences make every paragraph stand out and seem to flow into one another.

In this example introduction paragraph for a descriptive essay, the narrative is introduced from the very first sentence: “It was evening, and Nate had been driving his taxi cab since early afternoon.” The description is used when the writer begins relating details of Nate’s life as a driver: “Nate drove aimlessly through Washington DC, looking out of the window at the people walking along the busy streets” The emotional reaction occurs shortly after this, when “After an hour of driving, he realised that he hadn’t even covered the cost of gas for his trip.” This emotional reaction is reinforced with the use of a phrase synonymous (“hit him really hard”) and the simile “like a wave crashing down on him.”

The writer could have just stopped at this point, but instead they move into an analysis by adding details like “When Nate stopped to think about it, he wasn’t sure how he was going to pay next month’s rent” and “Nate had been living in Washington DC for only six months, but already things were getting tough.”

All these elements come together to create a picture in the reader’s mind while also revealing information about Nate’s life. The first two parts (description and narrative) could have been used to describe several different people; the third part (emotional reaction) is just an exaggeration of human nature.

The moment I heard my mom scream, I knew something bad had happened. As soon as she started screaming hysterically, neighbors ran outside to see what was wrong and they quickly called 911. Within minutes sirens filled the air and a fire truck pulled into our driveway; a paramedic jumped out and rushed over to my mom’s side while his partner went inside the house with one of our neighbors who was carrying a first aid kit. My mother had collapsed in the kitchen; her heart must have given out from all the stress and panic running through it that night because only a few days ago she’d had a heart attack followed by minor surgery to clear her blocked artery. Not only did this cause immense pain in her chest, it also caused major worries as she wondered how she was going to afford the medical bills and even if she was ever going to get back on her feet again.

In 1930 before World War II began there were many things being implemented to better the United States health system. The most important one being the construction of new hospitals. Many hospitals were being built during these times because the previous ones were not adequate for treatment; also doctors needed places to practice their new medical techniques they had learned from universities . Also men were joining more than ever before due to the high unemployment rate. All of these factors contributed to the opening of many hospitals across America during this time period.

How to write a descriptive essay about favourite...