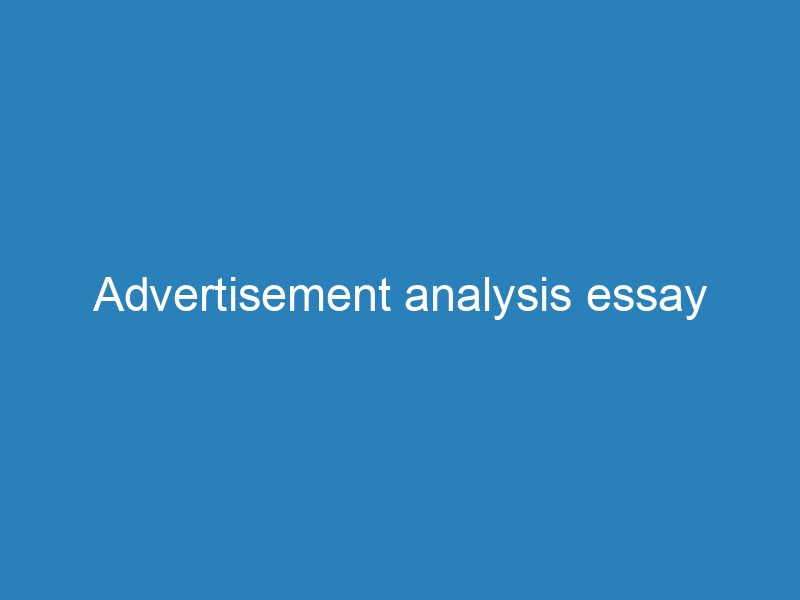 Advertising is an essential part of business, and so is advertisement analysis. The current market is very competitive. So, to survive, businesses have to do eye-catching ads. An ad analysis helps in identifying the gaps and how best to fill them.

As a marketing student, at some point in your studies you may need to do an ad analysis essay. In this kind of essay, your work would be to discuss a specific advert, scrutinize it, and explain why the ad was carried out and how it has influenced the target audience.

But to come up with a comprehensive and proper ad analysis essay, you need to do intensive research on every stage of the ad structure and the product or service being advertised.

What is an advertisement analysis essay?

An advertisement analysis essay is a type of academic essay that requires a writer to examine an advertisement. It is usually written about a print or TV commercial and its aim is to find any hidden messages in the ad, which may be deceptive or misleading.

This can be done by examining various aspects such as gender, age of the target market, use of lighting, color schemes, music etc. for example you can explain how advertising gives young males a dominant position over women through almost every detail on display in the ad. The counterpart would then have to analyze the same ad from the point of view that it treats both male and female equally therefore taking away any preconceived notions regarding gender inequality.

Even though this type of essay focuses on a particular work whether print or visual (television commercial, magazine ad etc.) the analysis can be expanded to look at how media as a whole is used to manipulate audiences.

It could for example, a compare and contrast essay on gender roles across various types of advertisement or television programs such as commercials, soap operas and music videos. The ability to use multiple sources in support of an argument is one advantage that this type of essay has over other essays on the same topic. This will not only prove your point but also show that you have done enough research about your topic.

When writing your ad analysis essay, use the following format: Introduction, body, and conclusion.

It is essential to introduce your ad analysis briefly to your audience, whether they are familiar with it or not, to help them to know your focal point before they read the essay.

It is in the body break down of the advert, discussing its content and the target audience, which forms an essential piece of your analysis.

When writing the body, you want to discuss a point per paragraph. Let’s say you are talking about the creativity of the ad, do so in a paragraph. The next section should be about another feature.

Your conclusion sums up your analysis and points out recommendations. At the same time, it echoes the content of your essay. It should be clear and concise, as it is a summary of what you have discussed in the article.

How to start an ad analysis essay

Coming up with a thesis and topic is a vital step in developing your advert analysis essay. The title dictates what you write.

Also, it’s the first thing your readers see before they decide whether to read your article or not. A captivating title attracts readers. So, you want to do your best to get it right.

Right after the title, the first few sentences are just as important as the title. It will help if you craft an eye-catching introduction for your ad analysis essay. You can start with a stat or an informative piece about the product that is being advertised.

Steps on how to write an ad analysis essay

The first step is to introduce your thesis by describing the product you’ve chosen as the sample for your ad analysis essay. You should analyze this product in and out and tell your reviewer whether he or she is conversant with the development of the work being advertised.

Please note, you don’t need to agree with the ad implicit message. Argue your claims in the essay as there’s no right or wrong answer about the implicit message. But make a claim and then support it through your arguments.

Tell your reviewer why the company decided to go with that mode of advertisement for the product you just described since there are different modes of publicity in the market. You should be able to portray well and in detail, the manner of the advertisement being used by the company.

Compare the company’s current model of the advertisement from the previous and what impacts it has had on the product market growth or loss. Ad analysis will help you know the loopholes in the market and correct them to beat the competitors.

Generalize your comments in this essay so that the person reading it can make the decision personally and without your personal opinion affecting their judgment.

We have a different target audience in the market, depending on the product, so you have to use the right methods to pass the information. For example, if your advertisement is meant for the kids, you can try using animated images or videos to attract them easily.

How to conclude an ad analysis essay

The conclusion should be the summary of the product, the mode of advertisement, and how it has influenced the market changes.

When concluding your ad analysis essay, you should be able to summarize all the steps of the essay ad analysis. Tell them the most critical things to consider while writing the essay and whether the mode of advertisement worked well for the product marketability you choose or not. You can come up with realistic scenarios to help your analysis look and sound reasonable.

Before you settle to write the Ad Analysis Essay, choose an advertisement to consider yourself a potential member of its target audience to have an advantage on the analysis. Otherwise, if your teacher chooses it for you, make sure you familiarize yourself with the references, graphics, and language that the ad uses.

How to do an ad analysis essay fast

Your Ad Analysis Essay should identify the ad’s three important things – its logical, emotional, and ethical significance, – otherwise referred to as the rhetorical appeals. Also, give special attention to the ad’s target audience by examining their values, beliefs, and attitudes, and establish whether the advertisement bodes well with them.

You can always reach out to our experts if you want help writing your advertisement analysis paper.

Similarities with other essay types:

These kind of essays are similar to other types of essays in the following ways:

This is because such work revolves around an imaginary world created by advertisers. In addition text and pictures don’t fully explain what they’re selling just as dialogue doesn’t show us exactly what a character looks like but advertisements are placed strategically to create a certain impression on viewers’ minds.

When tasked to write an ad analysis essay, the first things that you should think about can be summarised in 3 or 4 statements: What do we know about advertisements? Are they useful or harmful? Do you line the advert or not?

The world around is full of advertising and it takes place in all spheres of people’s lives from newspapers and magazines to radio and television. Advertisements allow manufacturers to promote their products effectively but whether its purpose is good or bad depends entirely on how successful it is.

Some say that advertisements are just another way to influence consumers while others claim that they’re able to increase sales volume by exposing people to new goods so in order to make a decision on this issue one has first to decide what the main purpose of advertisements is.

The role of advertisement analysis essay is to influence people towards buying a certain product or service while expanding their awareness about other products and services that may also be useful.

Analysis essays are usually written by experts who pay attention to all details and present these observations in an organized manner such as discussing facts, listing pros and cons or stating opinions.

This type of paper doesn’t necessarily provide new information but rather provides readers with another way of looking at things that they already know something about therefore in this case it’s easy to see how advertisement analysis essays are structured.

A writer has to clearly state his/her thesis within the introductory paragraph after which they have to explain, support and on occasion refute their point of view in the rest of paragraphs.

Advertising analysis essays are very similar to research papers and therefore they also must contain some type of bibliography depending on the writing style used (MLA, APA etc).

They can include photos or other graphic elements but make sure that you get them from a reliable source such as an editor, photographer or distributor if you want your paper to look good.

Advertisements are designed by professional designers who have experience with this job so instead of trying to imitate them find what you like about certain ads and mention why you feel that way in your essay.

Ask your question online to get help with your ad analysis essay or advert analysis research paper.

How to write a good college essay

How to Write a Summative Essay | Definition,...

How to write an ethics essay, topics, outline,...

How To Write a Film Analysis Essay With...

How to shorten an essay

How To Write a Photo Essay – Examples...

Essay Draft: How To Write a Draft Essay

How To Polish an Essay For a Better...

How to Write a Position Paper Essay |...

How to write an interview paper