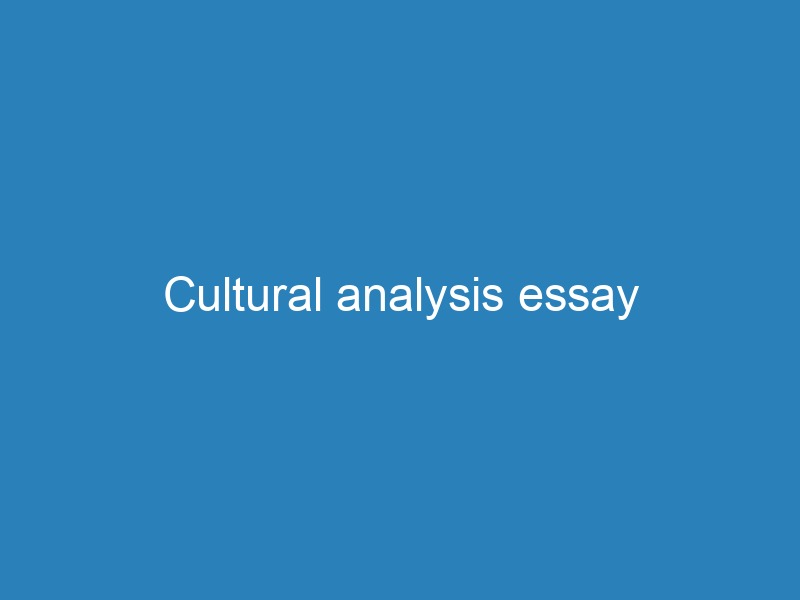 Writing a cultural analysis essay may be exciting to some, but it’s not easy. It puts your writing skills and reaching abilities to test. But don’t worry if you have such an assignment, for we cover everything you need to know to create a comprehensive cultural analysis paper.

A personal cultural analysis paper is a type of academic paper that explores the culture that you grew up in and how it has influenced your views. It details what it means to be a part of your culture, and how your upbringing has led to who you are today.

This can be done for any country, including Canada, India, China, Germany or any other. You may choose to address themes such as personal identity, morality, ethnicity, religion or anything else related to culture.

The cultural analysis paper is not limited to those topics but these are common examples.

There is no hard and fast rule for what to include, and your cultural analysis can be about anything you want. You have complete freedom in choosing your topic; just ensure that it relates to culture and personal identity.

What is a cultural analysis essay?

A cultural analysis essay critically analyses why different groups differ from one another according to the beliefs, customs, and attitudes.

We have different cultures in society; hence studying them helps us understand why they are the way they are and how they differ from another culture.

To ensure that the thesis is well understood, you have to select a topic and narrow it down to be understood easily by the reader.

When writing a cultural analysis thesis, you have to critically write about the belief of the group you’ve selected. Tell the reader about their customs and how it has affected their culture and attitude towards others.

How to pick a cultural analysis essay topic?

When picking a cultural analysis essay topic, narrow down to a particular culture, identify a specific its specific culture, and research it.

But you can pick a culture or a country as your sample for the cultural analysis essay topic. What matters is identifying a specific fact you want to study and write about in your essay. For example, you can discuss marriage in that culture.

Discussing a specific topic makes the research a bit easier. Do not overgeneralize your points but try to explain them well for the reader to understand. To engage the reader, support your arguments with examples and scenarios in real life.

How to correctly write the best cultural analysis essay ever?

Like other articles, a cultural analysis paper has three parts, namely:

Introduce your cultural analysis essay by writing briefly about the culture you have chosen. It sets the plan and preps the reader on what you want to dwell on in your entire paper.

A captivating introduction will entice the reader to want to read your entire analysis. So, give it your best shot. Pitch your idea about the cultural topic you are writing about, and invite the reader to tag along.

The body discusses several points about the culture you are analyzing. Here you have to be as impressive as possible to do justice to the topic you chose. As always, each point gets its own paragraph, with the first sentence introducing it, and more sentences elaborating on it before, the kicker sentence summing the argument.

Tell the readers why you choose the subject you are discussing to bring more light to its importance. You can quote the examples and shreds of evidence you have gathered from real-life scenarios. Use the conversational tone, and engage your audience to get both the real and written understanding of the topic.

10 exciting examples of cultural analysis essay topics to write about

The key theme of the personal cultural analysis essay will be exploring the customs, value systems, world view and central ideas or values that are particular to a certain group or community of people (this varies with different cultures). It is also known as ethnographic writing where you explore other ways of looking at things.

What You Can Focus Your Cultural Analysis Paper On?

There are topics which you can choose from when writing your personal cultural analysis essay. It should be noted that not all countries or cultures have the same issues, so some may not seem relevant in your paper, while others could fit perfectly.

The following gives an idea of the different themes you could include:

This essay will tend to look at how we can use the knowledge that different people have on their own sense of belonging, community and self-expression by showcasing racial/gender equality within each culture. In general terms, the value placed upon human rights has grown exponentially within our modern society; however I am sure there will always be exceptions to every rule!

The basic structure of a culture analysis essay paper which comprises of three main sections:

Tips on how to write a cultural analysis paper

Here are a few tips on how to write a cultural analysis paper perfectly:

Having a perfect topic sentence is as important as having an introduction in your essay. This means that if one fails to grab his reader’s attention with the help of his thesis sentence and loses him/her in the rest of the text then it will be difficult for them to come back again unless they are determined enough to do so. If you want yours to stand out, try following this simple structure: Thesis statement + “because” + reason(s) or supporting details .

To make your essay sound professional and amazing the proper use of transitions is essential. You can look at a standard APA format paper (a famous one) to get ideas on how to do this. Make sure you link every paragraph clearly with the previous ones so that there are no confusion for your reader.

Lastly, after finishing writing your essay, go over it once again. Take time to check: spelling errors punctuation grammar flow of text logical progression from paragraph to paragraph Even though these tips might seem very basic but they will really help you out if followed properly and consistently.

There should be an introduction section that links with the introduction part of the essay, then there is body where all arguments or supporting details are given, and last but not least the conclusion section (brief summary of what has been said in the previous parts). Do not forget to make your thesis statement clear in this part as well. Here is a good example of cultural analysis essay that you can follow for more writing help: click here

The key to creating an exceptional college-level essay is organization. An outline will organize your thoughts so that you can focus on writing. It should have three parts: introduction, body paragraphs and conclusion. The introduction should be comprised of several sentences describing the theme and issue being discussed within the essay.

You should remember to introduce each major idea with its own paragraph. This helps develop ideas one at a time while offering a break for the reader.

So to create a good outline of your cultural analysis essay, you should start by writing down all the points you have in mind and then organize them properly keeping all suggestions mentioned above in mind. That is how you can prepare yourself for an amazing cultural analysis paper!

What is a culture analysis essay?

Culture analysis is the systematic comparison between two or more cultures. It is the analysis and evaluation of cultural phenomena, it’s identifying the factors that shape culture and explaining how they impact on people. This paper requires a profound knowledge about both cultures you are analyzing as well as an ability to criticize them.

Culture can be defined as set of beliefs, values, norms, customs etc., of a particular society or community. It is passed from one generation to another by means of communication. The values considered most important in this field are equality between men and women, individualism, social mobility, toleration for diversity and respect for human rights.

The purpose of cultural analysis essay writing is not only to compare but also to evaluate these societies/cultures using appropriate methodology (historical method) methods include: comparative analysis, anthropological analysis, sociological approach etc.

What is a culture analysis essay structure?

This should be a well structured paper with an interesting introductory paragraph, which presents the main subject of study and thesis statement. There should be two body paragraphs that will again divide into smaller ones for further explanations. The conclusion must summarize the entire ideas stated in the essay to make it easier to remember and comprehend by your readers. It must also not forget to mention your opinion on both cultures/societies critically analyzed in the essay.

Unlike other papers, a cultural analysis essay requires you to analyse a topic, writing down your thoughts elements thoroughly. Take your time to explore your topic. A cultural analysis essay can be an exciting piece of work to create. You can make it enjoyable when you take the time to understand the information. So share your thoughts and ideas based on what you have learned.

Are you looking for help with a cultural analysis essay? Use our platform and get assistance for the top experts.

How to write a causal analysis essay | Topics, Outline, Examples

How to write a scientific paper

How to make an essay longer

How to write a critical response essay

How to Write a Thesis Paper | Definitions,...

How to write a philosophy essay

how to write a scientific method essay

How to Write a Problem and Solution Essay...

How to Write an Informal Essay

How to Write a Personal Essay

How to Write a Nursing Essay | Examples,...

How to write a personal analysis essay

How to Write a Short Essay

How to Write an Opinion Essay | Outline,...