How to write a movie reflection paper 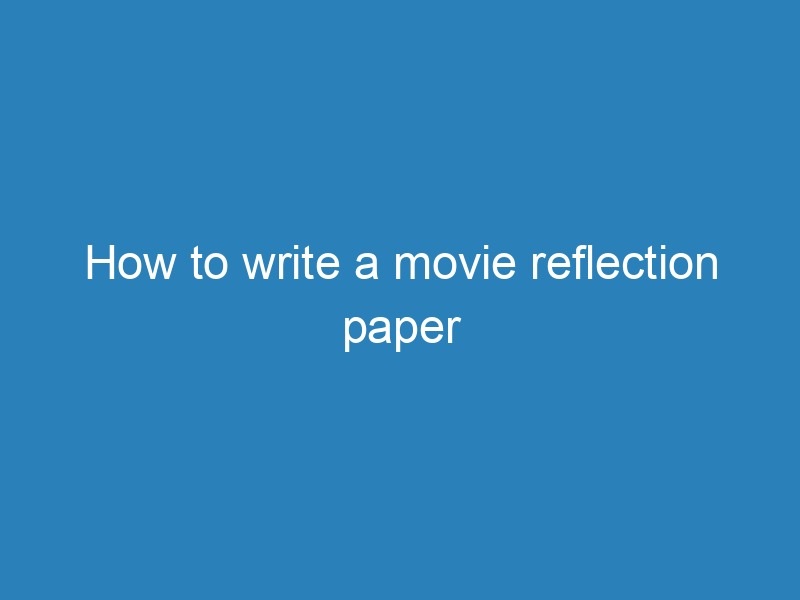 A movie reflection paper is a type of writing that you have to do when it is assigned on your english class. When you are required to write a movie reflection paper, this just means that you are going to discuss the theme and elements used in the film or movie.  Some scenes may have been shocking and others funny but what matters most to your reflective essay is how the film has affected you emotionally as well as intellectually.

Writing a movie reflection paper is a type of academic writing which is becoming more popular to use in film courses and other college courses. They have a lot of advantages over other types of assignments and they can help both the students and teachers. This article will give some tips on how you can write your own amazing film reflection papers for any movie or film.

How to write a movie reflection paper

In a movie reflection paper, you take a piece of media (book, TV series, movie, song, video game etc.) and write a paper detailing your understanding of the message that piece of media is trying to get across. You can analyze pretty much any aspect of a movie (or TV series,) but it’s always most helpful if you pick something that will have some impact on how other people interpret the work. For example:

The goal in doing this is not to analyze every part of a movie or episode (although that can be good for short essays, it might not apply when writing a reflection paper that is long) but instead just focus on one or two major points. This way, you’re getting more out of each movie! It’s a great way to make your understanding of a piece of media richer, and it allows you to connect the movie with other things that you’ve watched or read in class.

In order for your essay to reflect about a movie, there should be more than mere statements related on the story plot and prominent characters in it. Your reflections will show if you were able to perceive any messages passed by the director of the film, together with other details about the film. There are some details which should be included in your movie reflection paper.

Here is the list of things you have to talk about and include in your movie reflective essay:

How to start a reflection paper about a movie

What kind of films would make a good writing topic?

If you want your essay to be unique from other students’ essays, try looking for films that will interest audience most. You need not just choose a serious film but also use something funny or that makes people laugh as well since they say laughter is the best medicine. Choose an adventure or action-packed movie too if those are the ones that make up what you enjoy seeing in TV or cinemas. The only thing needed here is how you will present its characters your thoughts and opinions on it.

When writing a reflection paper for movies, you need to make use of such type of words as this would give your audience an idea if the film is good or bad from your point of view. Another thing that will help convey how the movie feels unique and different from others in its genre is by using action-related words like “angry”, “action”, “thriller”, etc. The choice of words may vary depending on what kind of movie you are going to write about such as describing an angry character with violent-related words while for comedy dramas, funny-related words are used instead.

Once you have chosen a film, the next thing you need to do is a title. You can name it after what made you interested in watching the movie or choosing its genre instead. It would be better if your title is clear enough that people who have not watched the film before will also know how it was all about and why they may want to watch it too.

Now that you have a good title, proceed to write an introduction, body paragraphs, and the conclusion as shown below.

How to structure a film or movie reflection paper – Outline/Format

The first step in writing a good movie reflection essay is write an introduction of what kind of film it is, its characters, plot and setting as well as any additional information related to it such as messages passed by this movie. The introduction should not be written on just one paragraph but make sure that there are several paragraphs included inside each other.

For each scene in a movie reflection paper, start with giving out its title and describe what happened in it as well. For example, you may give the title “The rainy scene” and write how it was when the character stood there with his best friend who just told him that he is not going to see him anymore or something like that. You can also add up your personal opinions about this scene after having written what really happened in it.

In a movie reflection paper, the body should be divided into two parts – the first one would contain different types of sentences such as question-answer and declarative sentence while the next part will focus on descriptive words which are used to give out details about certain scenes within each paragraph. A good movie essay requires both eyes-view (what happens) and words-view (your interpretation) so make sure that the sentences you have used are different.

For film reflection paper conclusion, you need to write a strong conclusion as it is used to summarize your thoughts and opinions on this film. This part would be longer compared to your introduction but shorter than the body of your essay and may contain about two or three paragraphs.

Here are some things to remember while writing a reflection paper about a movie or film:

A good film reflection paper must at least posses the following attributes:

What should be included in your writing your film reflective paper?

There are some additional things you need to include such as:

Now that you know the basics, it’s time for your first assignment! Make sure you remember everything we’ve talked about in this article and good luck with your first film reflection paper!

Remember that you can ask for professional reflection paper writing help from our professional essay writers! As a student, no matter how much effort you put into your writing work and how well you think you did at it, there is always someone who can do the job even better than you and faster. It is when you decide to hire a professional reflection paper writing service that things can become much easier for you, especially if you are not good at coming up with ideas on your own.

Many customers have already taken advantage of our services, but what do they think of us? We provide testimonials as well! Check out how others have rated us in these review sites (we have earned top scores!) and see if we are the right paper company you need at this time.

Hire the world’s best professionals are here and they are ready to write the perfect movie reflection essays for students like you  – 100% original papers guaranteed! You will also benefit from our 24/7 customer support staff and mobile apps so that you won’t ever be left without help.

Do not hesitate to make an order now – click here to fill in this quick form and we will write an amazing film reflection paper for you!

How to start a reflection paper | Introduction...