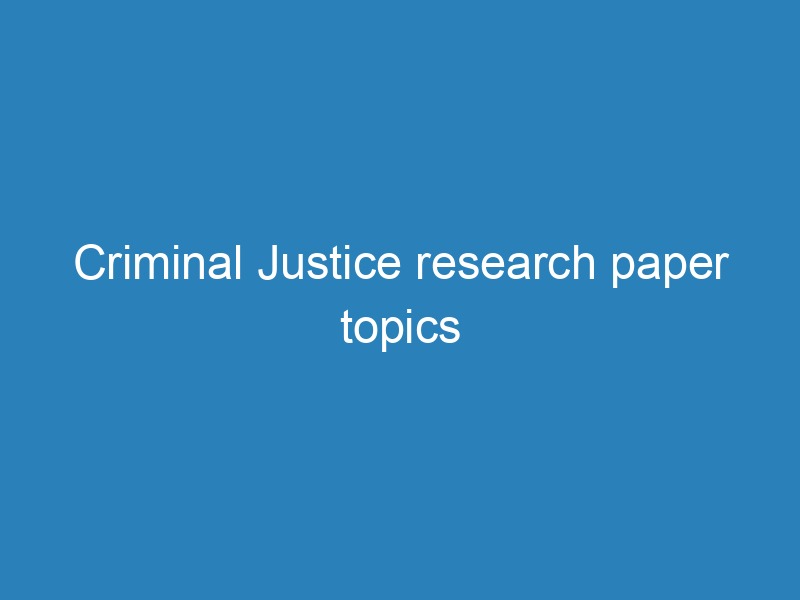 An important part of research paper writing is conducting your research via the library, online sources, and interviews. A good criminal justice paper should use resources that are scholarly in nature (i.e., peer-reviewed journals or scholarly books).

The following list of criminal justice research topics is not exhaustive, but contains many ideas to get started. Each topic includes suggestions for further exploration and information about the criminal justice system problems. It can be helpful to use this list when brainstorming ideas before choosing a topic for your criminal justice paper.

This list could also prompt you to do more research in one area that interests you and/or to explore a different area that is less familiar to you or that provides support for your topic.

Further, the list of criminal justice research paper topic ideas includes issues about crime and crime statistics in addition to theories about causes of crime. It would be possible to write a simple report about any one of these topics or assign a research paper that might focus on one of them. However, most criminal justice term papers are more complex and will require research and analysis to provide a perspective or explanation.

Some of the following criminal justice research topics will focus on crime, while others could be related to theories about causes of crime (e.g., social disorganization theory). Keep in mind that you will need to rely on evidence and data.

These criminal justice research topics focus on both domestic and international issues. You might also be interested in narrowing your topic so that it focuses only on the United States.

Below is a list of criminal justice system problems paper topics for your research writing:

Below is a list of criminal justice research methods topics:

Remember that you can always use a standard format to structure your paper. This means using an intro paragraph, explaining the topic, giving some background information if necessary and finally overviewing the main points discussed in this article. Remember not every paper topic requires all five paragraphs so just stick to what suits your assignment best!

When writing a criminal justice research proposal, it is important to choose a topic that has not already been thoroughly researched. Proposing a new, original idea will make the proposal more interesting for readers and improve your chance of successfully getting funding or grants.

One key consideration in choosing a criminal justice research proposal topic is whether the proposed study would be ethical. For example, if you are studying crime victims, find out if their participation in the study could place them in danger or cause them further distress. Also talk with potential funders to make sure they are comfortable with your chosen topic before you write any proposals for criminal justice research paper topics.

Here are some examples of topics for criminal justice policy paper:

Here is a list of good criminal justice capstone paper topics to write about:

These topics provide the opportunity to explore criminal justice issues and theories. Students can look at systems such as police work, corrections, courts and juvenile justice. They can be informative and persuasive pieces of writing for various courses. Below is a list of criminal justice administration research paper topics for students to explore:

The field of criminal justice research includes many aspects that are interesting to explore. Criminal justice ethics is one aspect that interests many people, especially because it deals with how the officer treated different elements in our society. If you are looking for a subject to write about in your dissertation or thesis paper on criminal justice, then this topic should help you narrow down your search criteria.

How to start a criminal justice research paper

How to write a criminal justice research paper

Here are the steps of writing a criminal justice research paper:

Your best chance for success in writing a successful criminal justice research paper is to select an interesting, well defined topic that interests you AND that will hold interest for anyone else reading your paper. Here are some tips on developing good topics:

Once you have selected your topic, the next step is to develop an outline for your paper. As with choosing a research paper topic, it is easiest if you can outline your paper’s materials before sitting down to write . An outline will help organize your thoughts and allow you to focus on collecting specific information. It will also be very useful when you begin writing because it helps ensure that all important aspects of your topic are covered in the paper. To create a research paper outline:

It is okay if you find yourself moving things around and editing as you go along and finalizing your ideas (in fact, it is recommended). However, before sitting down to write, make sure your paper’s skeleton is well-formed.

At this stage your research paper will begin to take shape as a finalized outline becomes a first draft of an actual paper. You will probably find that some sections are easier to write than others; depending on what sources were available, you may have more material for some areas than others. As long as you make an effort to include enough information for each section, it is possible that the final drafts of some sections will be longer than others–this is not a problem. The important thing is that your paper flows logically from one point to the next and that every major idea has been addressed.

Revise and edit until you are happy with what you have written. This is particularly important in the sections that address different areas of criminal justice policy because it will be difficult to demonstrate a clear, cohesive argument if one section does not logically lead into the next. As previously stated, the general strategy is to start from one point and work toward another so that each section builds on previous sections. However, this does not mean every sentence needs to directly reference the main topic; sometimes using an example or explanation can make ideas easier to understand even when they fall outside of the major “flow” (for instance: instead of simply discussing the justice system, you might reference policing policies and their effects on communities).

Type up the final version of your research paper. You can include additional information here if any major changes were made during the editing process (for instance: you could add new information that was discovered but did not fit into the original rough draft). At this stage, make sure everything is clear and follows the main argument throughout.

This is how you write a criminal justice research paper or term paper on any topic in 5 simple steps.