How to write a discussion in a lab report + examples 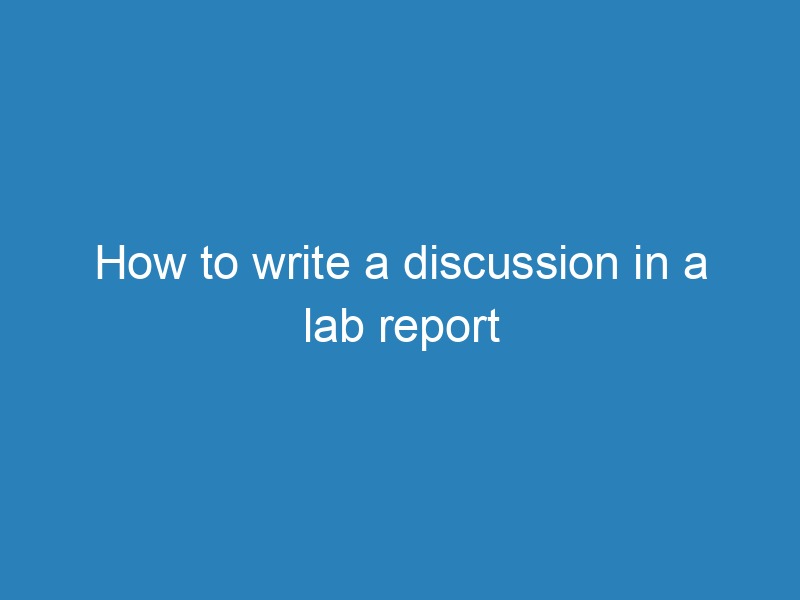 Lab reports are an essential part of any science education. They allow you to synthesize the data you have collected and learn from your experiments. When it comes time to write a lab report discussion section, it can be difficult to know where to start. In this guide, we will walk you through the process of writing a discussion for a lab report step-by-step. We will cover what should be included in this section and how to effectively communicate your findings. Let’s get started!

The purpose of the discussion section

The purpose of the discussion section is to interpret the data that you have collected and to explain what it means. This section should be written clearly and concisely, and it should be easy for the reader to understand. You should start by summarizing your findings and then explaining what they mean about the hypothesis or question that you were investigating.

In addition, you should also discuss any limitations of your experiment and what further research needs to be done to answer the question that you were investigating. This is an important part of the discussion section as it allows you to show that you understand the scientific process and that you are thinking critically about your data.

In this section, you can also: propose possible explanations for your findings and discuss any alternative hypotheses that you came up with. You should also consider the implications of your findings and what they could mean for future research.

The structure of a discussion section

Here is a basic structure that you can use when writing a discussion section for a lab report:

Let’s take a closer look at each of these elements.

When you introduce the findings of your experiment, you should be clear and concise. You should state the main findings of your study in a few sentences and then explain what they mean. It is important to be specific here and to avoid generalizations.

After you have introduced the findings of your experiment, you should then go on to interpret them. This means explaining what they mean in terms of the hypothesis or question that you were investigating. You should be clear and concise here and avoid making any assumptions about the data.

It is important to remember that your data can never “prove” a hypothesis. Rather, it can only support or disprove it. Therefore, you should always be careful when interpreting your findings and avoid overstating the conclusions that can be drawn from them.

After you have interpreted the findings of your experiment, you should then discuss their implications. This means thinking about what the findings could mean for future research and practical applications. You should also consider whether your findings challenge any existing theories or hypotheses.

It is important to be objective here and to avoid speculating about things that are beyond the scope of your data. For example, if you found that a drug did not affect heart rate, you would not say that it means that the drug is safe because further research would need to be done to confirm this.

Every experiment has limitations and it is important to acknowledge them in your discussion section. This means discussing the factors that may have influenced your results and explaining why they are important.

You should be clear about the limitations of your study and you should avoid making any assumptions about the data. For example, if you found that a drug did not affect heart rate, you would not say that it means that the drug is safe because further research would need to be done to confirm this.

Finally, in your discussion section, you should propose further research that needs to be done. This could include ideas for future experiments or studies that need to be conducted to clarify the findings of your experiment.

It is important to be realistic here and to come up with proposals that are achievable within the scope of your research. You should also avoid proposing research that is already being done by someone else.

In your lab report conclusion, you should briefly summarize the main findings of your experiment and explain their significance. You should also mention any unanswered questions that remain and propose further research that needs to be done to address them.

That’s it! This is everything you need to know about writing a discussion for a lab report. Keep these tips in mind and you’re sure to produce a high-quality discussion section that will help to strengthen your argument.

Below is an example of a discussion in a lab report on the effect of caffeine on heart rate.

This study had several limitations that should be acknowledged. Firstly, the sample size was small and this may have influenced the results. Secondly, the study was carried out in a controlled environment and it is possible that the results would be different in a real-world setting. Finally, the effects of caffeine on heart rate may vary depending on individual factors (e.g. age, weight, etc.).

In conclusion, this study provides evidence that caffeine does not affect heart rate in healthy adults. However, further research is needed to explore its effects in different populations and settings.

Below is an example of a discussion section from a college lab report. In this example, the student discusses the results of an experiment testing the effects of different concentrations of salt on the boiling point of water.

The data in Table one shows that as the concentration of salt increased, so did the boiling point of water. This makes sense because, with more salt in the water, there is more attraction between the water molecules and the salt molecules, meaning that it takes more energy to break these attractions and get the water to boil. The trend in Table one was consistent with what was predicted by Boyle’s law.

In Table two, it can be seen that as the concentration of salt increased, so did the temperature at which steam was produced. Again, this makes sense because, with more salt in the water, the water molecules are held together more tightly, meaning that it takes more energy to produce steam. The trend in Table two was also consistent with Boyle’s law.

The data in Tables one and two support the hypothesis that as the concentration of salt increases, so does the boiling point of water and the temperature at which steam is produced.

How to write a biology lab report + examples

Tell me about yourself essay

How to write a biology lab report +...

How to write a lab report for chemistry...

How to write an abstract for a lab...

How to write an introduction for a lab...

How to write a conclusion for a lab...

How to write an executive summary for a...