Roundworms are what type of biohazards?

Need help with this question or any other Writing assignment help task?

Post An Assignment Now
Roundworms are what type of biohazards?
0
Round worm is a parasitic biohazard that affect humans. They can be parasitic, free-living worms that infect the human intestine. They can be easily spread if proper hygiene is not observed. Poor human and animal waste disposal is one of the major cause of spread of roundworms.
~ answered by VIPService ~ last update 04/11/2021 (New)
Hire Me
0

Roundworms are what type of biohazard?

Roundworms are classified as parasitic nematodes that travel through their hosts' subcutaneous tissues which can then infect other humans or animals. The primary means of transmission is through the ingestion of contaminated food or water. However, because roundworms can survive in harsh conditions, they are also considered resilient enough to travel via animal feces and other forms of matrices that contain parasite eggs.

The life cycle begins when an infected human or another mammal accidentally ingests roundworm larvae while consuming contaminated food or water. Once inside the host, larvae travel through the body before maturing into adults and producing eggs in the intestines.

The roundworm is usually not harmful when it first enters a human's body since its digestive systems is not mature at this stage of development, but after two to three months they become parasitic and begin feeding on their host's blood. The worms can continue to grow and reproduce for up-to ten years, which is a dangerous situation that needs to be treated by medical professionals as soon as possible.

One of the most notable symptoms associated with roundworms infections is fatigue because the parasites suck the host's blood throughout their feeding cycle. Other symptoms include: cramps in the stomach, diarrhea (which can be bloody if the roundworms have begun to eat away at the intestinal walls), itchy skin and weight loss.

If left untreated, some of these symptoms can worsen and lead to other complications such as: malnutrition, respiratory issues, blindness and even paralysis in some cases.

The majority of parasitic infections that involve roundworms can be treated with a proper regimen of anti-parasitic medications prescribed by a doctor. In severe cases, surgery may be necessary to get rid of the worms that have migrated out of the intestines and into other organs in the body.

All living creatures must take precautions when it comes to protecting themselves from parasitic infestations because roundworms and other forms of harmful parasites do not discriminate on race, age or health. 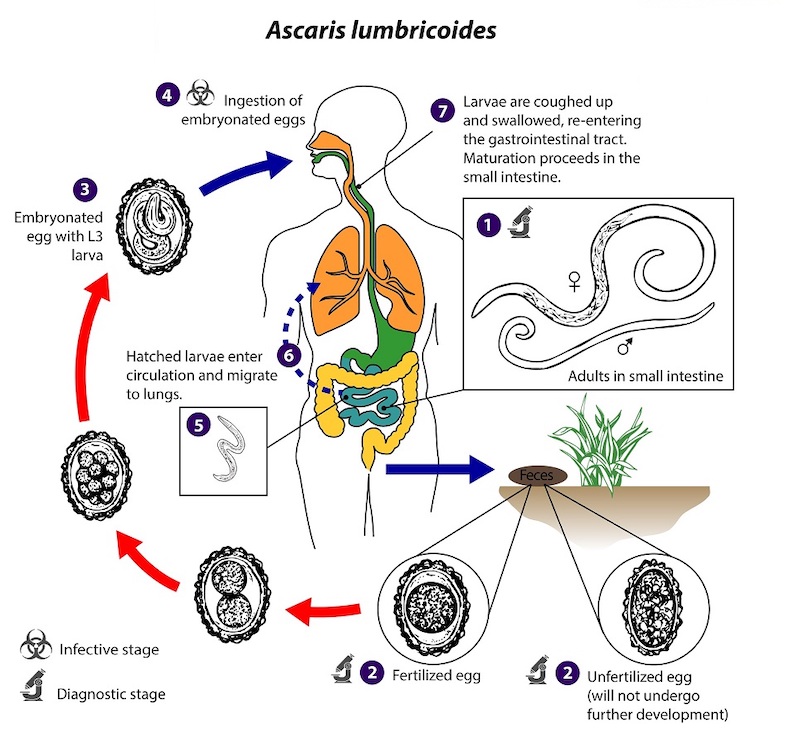 What is a biohazard?

A biohazard is anything that poses a threat to the health of the general populace. Biosafety Levels are used by scientists to denote how dangerous their work is, and also help them decide what precautions they need to take when doing it.

How are roundworms a biohazard?

Roundworms are among the most common parasites affecting people in the United States, who pick them up from contaminated food and water. Once inside a human body, roundworms can cause pain as well as damage to the brain and spinal cord.

~ answered by homeworkdoer ~ last update 01/08/2022 (New)
Hire Me
Login to buy an answer or post yours. You can also vote on other others
Log In Create Account

Get Help With a similar task to - Roundworms are what type of biohazards?

Similar orders to Roundworms are what type of biohazards?
27
Views
2
Answers
Through this two-part project you will develop your personal ethical vision statement
56
Views
2
Answers
Which statement summarizes the main idea of reciprocal determinism?
50
Views
2
Answers
Economics is best defined as the study of how society manages its scarce resources.
59
Views
2
Answers
What is a major criticism of maslow's hierarchy of needs?
Writing Assignment Help
Tutlance Experts offer help in a wide range of topics. Here are some of our top services:

Post your project now for free and watch professional experts outbid each other in just a few minutes.